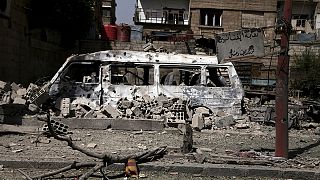 Updated: 18/09/2015
<p>This is amateur footage, posted online, purports to show the aftermath of a Syrian regime attack on a neighbourhood in Aleppo.</p> <p>Residents are seen pulling a victim from under the rubble after the attack (which appears from the one-minute mark in the video).</p> <p>The first part of the video appears to show intense fighting between rebel and government forces.</p> <p>Aleppo was Syria’s most populated city and commercial hub before the conflict erupted in 2011.</p>
no comment