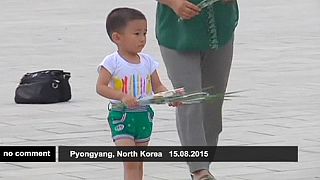 Updated: 15/08/2015
<p>Annual commemorations marking the end of <span class="caps">WWII</span> take place in Pyongyang. North Korea began to hold the ceremony after Japan relinquished its 35-year occupation of the Korean Peninsula at the end of World War II. The East Asian nation established its independence in 1948, splitting from South Korea in a battle over sovereignty that triggered the Korean War in 1950. The separation remains a source of tension between the two countries to this day. Since its founding, North Korea has been ruled by the Kim family, currently headed by Kim Jong-un.</p>
no comment