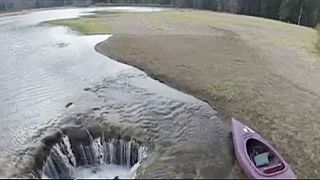 US: mystery lake drains in Oregon

Updated: 07/05/2015
<p>A large lake disappeared into a hole under the ground in Oregon’s Willamette National Forest last April, as a result of an open lava tube. In a video published by Oregon newspaper The Bulletin, water was seen forcefully making its way down the lava hole, draining the lake in its entirety. Local reports said the phenomenon occurs every year leaving the area dry, after small streams of water gradually refill the lake again.</p>
no comment