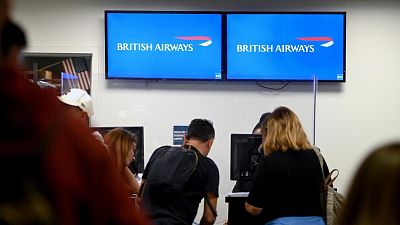 Around 16,000 British Airways (BA) staff will receive a pay rise of on average 13 per cent by the end of the year.

The workers, including cabin crew, baggage handlers and engineers, will see their pay return to pre-pandemic levels. Unite union says it came after "tough negotiations" with the airline following threats of industrial action involving check-in staff earlier this summer.

In June, hundreds of check-in and ground staff at Heathrow airport voted to go on strike over pay. A total of 700 workers from BA were planning to walk out as the busy holiday season began - but the action was called off after a deal was made for a pay rise.

Why did BA workers go on strike?

Unions said staff voted to take action after a 10 per cent pay cut imposed on them during the pandemic had not yet been reinstated.

Many of the workers are represented by Unite, who recorded a 94.7 per cent vote in favour of the strike. Others were backed by GMB with 95 per cent of members voting for the walkout.

Many GMB members who voted for the industrial action were low paid women, according to the union.

“All our members are asking for - and these are primarily low-paid women - is for BA to reinstate the 10 per cent taken from them during the pandemic,” a spokesperson for GMB said at the time.

When the vote was announced, BA said it was “extremely disappointed” that the unions chose to take this course of action.

They claimed that “despite the extremely challenging environment and losses of more than £4bn (€4.7bn), we made an offer of a 10 per cent payment which was accepted by the majority of other colleagues.”

GMB pointed out that the pay of BA bosses had returned to pre-pandemic levels while the one-off 10 per cent bonus for other staff was only for this year. They wanted the cuts imposed during the pandemic to be reversed permanently.

What does the deal mean for BA staff?

Now the deal has been agreed upon, thousands of workers will see on average a 13 per cent pay rise by the end of the year. Staff will see lump sum of 5 per cent of their wages this month, a consolidated 5 per cent increase in September and then another consolidated 3 per cent in December.

Unite welcomed the deal - which was overwhelmingly backed by BA staff - but union chief Sharon Graham said the company still has "a long way to go to restore the trust and confidence" of its workforce.

"By standing strong with Unite, our members have compelled BA to table a pay rise that goes toward compensating for the pay cuts suffered during the pandemic," she said in a statement.

"There is still some way to go for workers at BA to trust this company again, given the hostile manner in which they conducted themselves during the pandemic."

BA said it was "pleased with this outcome".

Urgent warning for easyJet and Ryanair passengers with flights in July