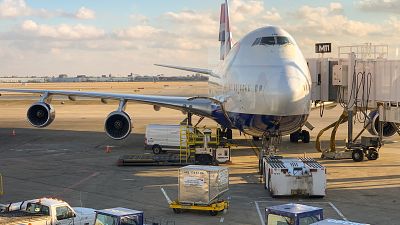 Across Europe, airport and airline staff have been striking, causing severe disruption to summer travel.

Employees including ground staff, baggage handlers, cabin crew and pilots have been walking out in countries like Spain, Italy and the UK.

With traveller numbers almost back to pre-pandemic levels, the industrial action has caused chaos at airports around Europe.

So what has prompted the summer strikes and will the walkouts continue?

Why are airport and airline staff striking?

The easing of pandemic restrictions has seen a sharp spike in air passenger numbers - and the aviation sector has been struggling to cope.

During the pandemic, many airport and airline workers were laid off resulting in a serious lack of staff this summer.

Overworked and underpaid, employees including check-in staff, cabin crew and pilots have been striking over the last few months.

“It all started with COVID,” says Eoin Coates, head of aviation at the European Transport Workers’ Federation.

The federation represents workers in all kinds of roles including catering, fueling, boarding and air traffic control.

“Airport workers are in quite precarious work,” Coates says, adding that the problem isn’t new: “Ground staff particularly have had their terms and conditions reduced over decades now.”

Coates says airport and airline employees were already struggling with low pay and zero-hour contracts, but the pandemic was “the spark that triggered all this off”.

“In countries like Belgium, Spain and Italy, where we are seeing a lot of strike action, employees were put on ‘COVID contracts’ and received pay cuts,” he says.

Many workers were also laid off, meaning there is now a major shortage of staff at airports to deal with the returning traveller numbers.

Coates says we are seeing walkouts because now “workers are working harder and in many cases for less pay due to COVID-era agreements that are still binding, many until 2024.”

Ryanair cabin crew, Lufthansa ground crew and easyJet employees have all cited low pay as their reason for striking.

Ryanair’s problems began before the COVID crisis and still haven’t been resolved. Lidia Arasanz, a unionist at Unión Sindical Obrera (USO), says Ryanair cabin crew in Spain have been calling on the company to honour contract agreements since 2019.

“We used to be on Irish contracts, but in 2019 Ryanair signed an agreement to pass all workers under Spanish law,” she explains. “But they have only implemented the parts that they want.”

The union is asking the airline to align workers’ contracts with Spanish law, including giving employees 30 days of annual leave, 14 bank holidays per year and two extra payments most Spanish workers receive annually.

The union is also calling for employees fired over previous strike action to be reinstated.

According to the unionist, 11 employees were dismissed and around 100 are facing disciplinary action.

Will there be more airport strikes this summer?

Coates says the walkouts over COVID contracts have pushed companies to begin negotiations but not much has been resolved yet.

As such, it is likely airport staff will continue striking over the summer. “The summer schedule will last at least until mid-September and the pressure will still be there on workers,” Coates says.

“Even if we manage to renegotiate agreements now, by the time we have the number of workers in place to reach those demands the summer will be over.”

EasyJet pilots in Spain have already announced they will strike for nine days in August over pay and working conditions.

In Portugal, aviation staff from operator ANA have planned strike action to push for wage increases from 19-21 August. The walkouts are likely to cause serious disruption at major airports including Lisbon, Porto and Faro.

Ryanair staff have also planned regular industrial action for the next five months. The walkouts will take place every week, from Monday to Thursday, and will each last 24 hours.

“For the moment nothing has changed. We have been sending emails to Ryanair to try to arrive at an agreement but we didn’t get any answer,” says Arasanz.

“The only response was letters to the striking committee threatening us and saying we are under investigation.”