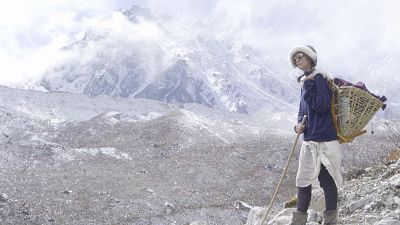 When you think of an adventurer, you probably imagine a white man in a pith helmet. Or at least that’s the image we’re always shown on TV or in films.

That doesn’t mean there aren’t those that don’t fit this age old stereotype. Female explorers in particular have generally been overlooked throughout history in comparison to their male counterparts.

Elise Wortley wants to change all that with her project ‘Woman with altitude’.

Elise was 16 years old when she first read a book by Belgian-French explorer, Alexandra David-Néel.

Alexandra’s ultimate goal was to learn more about Buddhism. Without resources like the internet in the early 20th century, the best way to do this was to travel and discover more for herself.

“It completely blew my mind, and I couldn't really understand why I'd never learnt about women like Alexandra at school,” Elise tells Euronews Travel.

“I actually kept re-reading Alexandra's book and I finally got to the point where I thought, ‘You know what? I'm actually going to go and do it and follow in her footsteps’.”

When she recreates these epic expeditions, Elise doesn’t just grab her coat and boots and set off hiking.

To gain a full understanding of what these journeys were like for the women that originally made them, Elise wears and uses only the clothing and equipment the explorers would have had at that time.

Alexandra’s expedition to Tibet took place between 1911 and 1925. Although she writes about her journey in great detail, there’s less to be said about her clothing.

“They were already struggling to be taken seriously as authors so they're not going to start writing about what undergarments they had or what pants they were wearing,” Elise explains.

The modern day adventurer found a photograph of Alexandra and based her entire outfit on it. Elise recreated the large yak wool coat, hand knitted hat and traditional backpack. She spent months researching the boots, types of dresses, woolly tights and other accessories for her journey.

When it came to finding a backpack to carrying her equipment, Elise had assumed she would buy a second hand one online. However, just before her trip, she discovered they were far more expensive than planned.

“I ended up making my own backpack out of a chair that I found on the street because essentially it was the same sort of frame,” Elise says.

Building an all female team

Following in the footsteps of these explorers, raising awareness of their stories and inspiring women today, Elise decided to work with an all-female team.

“There's a really amazing bond I think that you get, especially with the local women that you meet along the way if it's an all-female team, they feel a lot more comfortable,” Elise explains.

For her journey through the Himalayas to Tibet, Elise needed a mountain guide. After months of being told ‘women don't do that job’, she eventually found Jangu.

Jangu is a Himalayan adventure specialist from northern India. She is passionate about supporting local women through tourism and has established a homestay in her village.

“Through the guides, I learnt so much about the culture of the place and how their lives have been growing up and what's changed, you know, since the female explorers were in that country,” she adds.

Alongside Jangu, Elise also hired a female videographer, Emily, to document the expedition.

And here at Euronews Travel, we’ve decided to continue the theme as this entire episode was produced, edited and executive produced by women.

Elise’s expedition took her through an area of northern India called Sikkim. Here she sought out two sites described by Alexandra in her book: a special cave and the world’s third-highest mountain, Kangchenjunga.

High in the mountains, Elise struggled with the cold as temperatures dropped as low as -15C. She often found it was too cold to sleep in her tent.

Instead, she spent her nights sleeping under the stars, lying as close to the fire as possible.

“In her book, [Alexandra] writes about how she would just put her coat on and sleep in the snow. And I was like, ‘How does she do that?’ Because that is crazy,” Elise says.

Elise soon discovered Alexandra had spent years mastering a Buddhist breathing technique which helps to warm the body - something Elise didn’t have time to learn.

For Elise’s second expedition, she stayed a bit closer to home and headed north into Scotland.

She was inspired by Nan Shepherd, a Scottish explorer and writer, whose face is now on the Royal Bank of Scotland £5 notes. Elise spent 3 weeks exploring the Cairngorm mountain range.

One of Nan’s key beliefs she shared in her writings is that adventure is not about getting to the top of a mountain but about taking your time to experience the mountain as a whole.

“It's kind of a really harsh, amazing area that you wouldn't think you'd get in the UK, especially not me, being from London,” says Elise.

Like the Himalayas, the cold was one of the toughest aspects of this expedition too.

“I went in the middle of summer because stupidly and very naively, I thought, Oh, it would be really warm,” explains Elise.

“I got up onto the plateau and it was raining sideways, wind and the clothing got completely soaking wet and I was freezing cold for about four days.”

Though Nan’s book ‘The Living Mountain’ was only published in the 1970s, it was actually written in the 1940s about her exploration of the Cairngorms at this time.

This was of course, during WWII when the country was under wartime rationing.

“I did loads of research into what people had in Scotland during the war and actually little things came up like they had Mars bars and little bits of food like this,” Elise explains.

According to Elise, whenever she did go into villages to stock up, knowing she could have Mars bars in a historically accurate way was very tempting.

“I would stuff my face when I got to a shop,” she laughs.

As well as hiring local female guides on her expeditions, Elise also uses her trips as an opportunity to raise money and support local charities.

On her first expedition, she donated all of the money raised to Freedom Kit Bags. This charity based in Nepal provides hygienic and reusable sanitary products to women in poor communities.

This also helps to support their education as many girls are forced to miss school when they’re on their period.

And on her Scottish adventure, Elise raised funds for Scottish Women’s Aid, a charity that works to prevent domestic abuse.

What’s next for Elise Wortley?

Elise already has plans for her next expedition, following in the footsteps of Freya Stark

Freya was the first woman to be allowed into the Royal Geographers Society (RGS). She created detailed maps of the Valley of the Assassins in Iran which until that time was unmapped.

Elise plans to follow some of Freya’s original maps through Iran. Although originally Freya used male guides, Elise has found a team of local female experts to accompany her on her expedition.

Watch the video above to learn more about Elise’s expeditions.