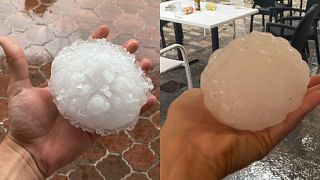 Apocalyptic, tennis-ball sized hailstones rained down on parts of Catalonia this week, shattering car windows and injuring dozens of people.

Tragically, a 20-month-old baby died after being hit by a falling stone.

The hailstones - some up to 11cm wide - are the largest recorded in the region for two decades. But changing weather patterns could make storms like this more common, a study indicates.

In a 2021 paper in the Nature journal, scientists from Universität Bern, the University of New South Wales, and the Karlsruhe Institute of Technology investigated the impact of climate change on hailstorms.

“In most regions, hailstorm severity is expected to increase with climate change,” they concluded.

The science behind this is a bit complicated.

During a thunderstorm, updraughts of wind carry drops of water into the atmosphere. When the air is cold enough, these drops freeze.

As moisture from the air gathers on the outside of the frozen droplets, they grow bigger. A stone will keep growing until the updraught holding it up can no longer support it.

If there is a lot of moisture in the air, and the wind holding it up is very strong, a hailstone will grow bigger.

Although the ‘melting point’ - the height at which hail starts to melt before hitting the ground - will rise as the earth heats up, this won’t prevent giant hail. While small stones will melt into rain, big stones fall more quickly, so they won’t always melt before reaching earth.

“As a result of anthropogenic warming, it is generally anticipated that low-level moisture and convective instability [the ability of an air mass to resist vertical motion] will increase, raising hailstorm likelihood and enabling the formation of larger hailstones,” the study warns.

Though climate change will likely make hailstones bigger, it won’t necessarily increase the frequency of hailstorms - at least, not everywhere.

This is because hailstorms need a specific set of conditions to form.

As well as a moisture-heavy environment and strong winds, they require a particular type of weather front: hailstones thrive in areas with warm, humid surface air below cool dry air.

As climate change plays with these factors, meteorologists have tentatively sketched where storms might become more or less frequent.

“Observations and modelling lead to the general expectation that hailstorm frequency will increase in Australia and Europe, but decrease in East Asia and North America,” the authors write.

“It is tricky to know exactly how thunderstorms are changing across the globe,” he wrote.

“It could be that damaging hail storms are becoming less frequent in some places and more frequent in another.”