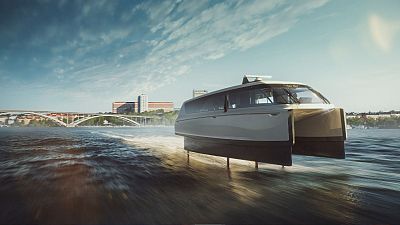 The makers claim to have made the most energy-efficient electric vessel yet.   -   Copyright  Candela
By Callum Tennant  •  Updated: 08/08/2022

The world’s fastest electric ship will set sail in Stockholm next year, cutting commuting times between some archipelagos in half.

The Candela P-12 is a 30-passenger “flying ferry” that will reach speeds of 30 knots. Even better, the ship is said to be the most energy-efficient yet.

Candela has enjoyed significant investment and support from the Swedish government, with the firm partnering with Stockholm for a nine-month passenger trial in 2023.

How can you make a boat fly?

The vessel will use three carbon fibre wings, known as hydrofoils, which allow it to lift out of the water when travelling at speeds above 18 knots.

Once airborne, the P-12 will be able to reach high speeds and travel long distances due to the significant reduction in drag that comes with flying above the water.

Candela’s technology reduces energy per passenger kilometre by 95 per cent compared to current vessels. The firm claims the ship will be even more energy-efficient than a hybrid bus, and will be able to recharge its batteries within an hour.

Candela partnered with the Swedish National Traffic Agency, which has funded half of the boat, with the company funding the other half.

Stockholm is the ideal launchpad for the P-12 due to its many archipelagos and waterways. The City of Stockholm and Candela plan to deploy the vessel to connect the rapidly expanding suburb of Ekerö and the city centre.

Ekerö residents currently have to undertake a 55-minute trip by bus, subway, or conventional ferry. The Candela P-12 Shuttle will cover the 15km route in 25 minutes - saving commuters 50 minutes a day.

The P-12’s flying ability and subsequent lack of wake have allowed it to gain an exemption from Stockholm’s 12-knot river speed limit.

The near-zero wake will also prevent wave damage to sensitive shorelines, nature, and other vessels, with the P-12 generating less wake when at full throttle than a conventional passenger ship travelling at slow speeds.

As an added benefit, sea sickness shouldn’t be a problem for any P-12 passengers.

Thanks to the boat’s computerised flight controller, its hydrofoils will be adjusted up to 100 times per second to keep the ferry flying level.

Flying aboard the P-12 Shuttle in rough seas will feel more like being on a modern express train than on a boat.

“No other ship has this kind of active electronic stabilisation. Flying aboard the P-12 Shuttle in rough seas will feel more like being on a modern express train than on a boat: it’s quiet, smooth and stable”, says Erik Eklund, Vice President of Commercial Vessels at Candela.

Maritime traffic is already Stockholm’s most popular public transport, but it is served by a fleet of more than 70 comparatively inefficient diesel-powered boats.

Gustav Hemming, vice president of the Regional Executive Board in Stockholm who is responsible for sea-bound public transport, calls the P-12 a game changer when compared to existing options.

He says, “we need new technology that is better for commuter ferries. Because today, they are very attractive, but they are not very evolved.”

“They have some environmental impacts locally,” he adds. “They are not very energy efficient, they have a negative impact on the climate.”

The City of Stockholm’s County Council is also keen to help as it recently decided to take a more active role in testing and supporting new public transport technology.

Candela claims that in Stockholm, passenger vessels only have a 17 per cent occupancy rate on average, meaning that a 300-passenger ship carries only about 50 people on most days.

They believe that smaller vessels with more frequent schedules would better serve residents than larger vessels which depart less often.

On the Stockholm-Ekerö route, Candela’s proposal is to replace the current pair of 200-person diesel vessels with at least five P-12 Shuttles.

Instead of two departures per day, there would be a P-12 Shuttle departing every 11 minutes.

Candela is predicting that this plan would also result in a 60 per cent reduction in costs compared with the current vessels, although it claims this is a conservative estimate.

Mikael Mahlberg, head of communications at Candela, says that local and national politicians have championed the project.

“We have a lot of backup from politicians as well because there’s a huge drive here towards boosting marine traffic to alleviate congestion,” he says.

He notes the irony that waterways are the oldest type of infrastructure in many cities, yet we aren’t using them effectively today, something he believes his firm can change.

Could other countries get ‘flying ferries’?

While the P-12 will debut in Stockholm, it has plans to eventually produce hundreds of vessels every year for worldwide distribution.

Candela says over 600 cities, municipalities, vessel operators, and urban developers have already expressed an interest in the shuttle.

While converting interest into orders is the real test, the P-12 could cause a green revolution in maritime commuter travel.

The P-12's green credentials will be even clearer if more places follow Stockholm’s lead in powering the vessels entirely from renewables.