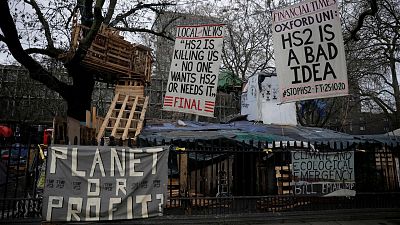 The network was once proposed as a highly advanced, environmentally-friendly solution to the UK’s inter-city transport problem. But the reality is shaping up to paint a very different picture.

HS2 is due to exceed its budget by up to three times more than original estimates, and Elon Musk once scoffed at its lack of innovation - almost a decade ago.

Wildlife and conservation campaigners have called it an “inept and recklessly run project” in a petition that reached 155,000 signatures, meeting Parliament's debate threshold for consideration.

That debate is happening tonight. Here is a history of the controversial railway, who it will affect, and why environmentalists want it scrapped.

What is HS2 and where will it go?

HS2 is a high-speed, government funded railway proposal that plans to connect a series of major cities across the UK.

It first got the go-ahead in 2012 despite strong cross-party opposition across the UK government and its voters. Early budget estimates first came to £33 billion (€38.7 billion), a figure we now know to be grossly misrepresentative.

The trains are set to be faster than any others in Europe, operating at speeds of up to 250 mph (402kmh). To compare, France’s Eurostar reaches highs of 100 mph (160 kmh) when crossing the Channel Tunnel.

HS2 will be developed in several phases, starting with a connection between London and Birmingham. A start date of 2026 was initially pinned to this phase but the Department of Transport concedes this could come several years later.

Phase One of the scheme purports to cut travel times between London and the Midlands from one hour 21 minutes to just 52 minutes. If successful, construction will begin in cities in the North of England and Scotland.

Justine Greening, Transport Secretary under David Cameron’s government at that time, called HS2’s proposals "the most significant transport infrastructure project since the building of the motorways.”

A company called HS2 Limited was formed to oversee its operations, including environmental analysis and the purchasing of properties obstructing the route.

Why are people against HS2?

Opposition remains strong against HS2 for a host of different reasons.

Some people believe COVID-19 has invalidated the network’s major selling point of cross-city commuting due to an influx of home working. Others believe the huge sums of government money ploughed into the project could be better spent on other infrastructure, such as education, or healthcare.

Critics have assessed that the total cost of HS2 could even fund Britain’s National Health Service for a year or pay for 4 million people to get a university education.

Front and centre of the fight against HS2 is its cost on the environment. Construction of Phase One will continue for a minimum of another five years and create an “unacceptable level of damage to European, national and county-important species,” according to the HS2 Action Alliance.

The Woodland Trust estimates that 32 ancient woods will be left vulnerable to destruction by phase one of the project alone.

One of HS2’s primary arguments was that it would positively benefit the environment by encouraging more people to travel by train instead of less carbon-intensive means. More so, that it would put Britain on track to a carbon neutral future.

This has since been debunked by the government’s own calculations.

Carbon-modelling predicts that in the HS2’s predicted 120-year lifespan it may never become carbon neutral at a time where the UK is being looked upon to lead by example in meeting the aims set out by the Paris Agreement. It is expected this will be discussed in tonight's debate in the wake of the IPCC's damning "code red for humanity" report.

The tense relationship between the government and HS2 opposition

Earlier this year several activists occupied a tunnel network underneath Euston Station they had spent months digging in secret to obstruct any further construction.

From the 100ft depths of London’s underbelly, their assertion was loud and clear: “We will last as long as we can down here.”

18-year-old Blue Sandford was one of the demonstration’s youngest members and is a prominent voice in the country’s climate activism. She describes HS2 as a “badly disguised land grab.”

It's been quite a year for Blue Sandford - from permanently leaving school to being arrested to now writing her first book for @XrYouth/@ExtinctionR at 17.

The group were forced deeper into a narrow shaft over a week later when HS2 sent bailiffs into the space to evict them and remove their possessions. The final group member left after 31 days - making it one of the longest subterranean protests in UK history.

Several other protest groups have been formed to the point that railway bosses have asked for even more government resources to protect them from incurring further damages and costs. A number of significant protests on Phase One of the route between London and Birmingham have cost £75 million (€88 million) to date.

Vocal opposition against HS2 equally spans some of the UK’s leading climate organisations.

“The Wildlife Trusts have long challenged the design and approach of HS2 because of the irreversible damage caused to nature and the lack of information about how the project plans to make up for this loss,” Joan Edwards, director of policy at The Wildlife Trusts, tells Euronews Green.

Why is there a debate happening now?

Naturalist and television presenter Chris Packham has long-campaigned against the progression of HS2. Most know him from his lengthy career presenting Springwatch, a much loved staple in British nature programming.

Hello , I’m off to tonight’s Westminster Hall Debate held as a result of my petition reaching 155252 people who wish to see #HS2 stopped . You can watch it here at 6pm https://t.co/XcgHe8dvTb@stophs2@stophs2@XRebellionUK@Hs2Rebellionpic.twitter.com/IOR2xPNCmJ

Parliament is about to debate whether to rethink HS2 . @HS2Ltd’s current plans are devastating whole ecosystems and habitats . Ask your MP to speak up for nature and support the debate . https://t.co/b6cwDNuiIWpic.twitter.com/U6RqksCpc8

He created an online petition asking Parliament to repeal the High Speed Rail Bills on the basis that MPs voted on misleading environmental, financial and timetable information provided by the Department of Transport and HS2 Ltd.

The petition exceeded its compulsory consideration target by over 55,000 people, leading the Petitions Committee to decide on a date to discuss the costs and benefits of HS2.

UK parliamentary ruling states that any petition amassing over 100,000 signatures must be considered for a debate between the UK’s political representatives. There is no expectation that all 650 must attend, but at least one Minister from Boris Johnson’s cabinet will be there to oversee the debate.

It is highly unlikely that the debate will lead to the closure of HS2 in any capacity given how far down the line it is. But it might encourage key government figures to listen to the public’s climate concerns.

Taiwo Owatemi, Labour MP for Coventry North, will chair the debate. She tells Euronews Green that she is “ really hopeful” about the discussion and wants to provide a space where “MPs can make their constituents’ voices heard.”

“Responding to the climate emergency, revolutionising our green infrastructure and protecting the natural environment - all three are subjects of real concern for people up and down the country,” she says.

“For or against HS2, we have a duty to make sure that what happens next is based on evidence from experts and residents alike.”

You can tune in to the debate in the UK at 6pm GMT/7pm EST here.