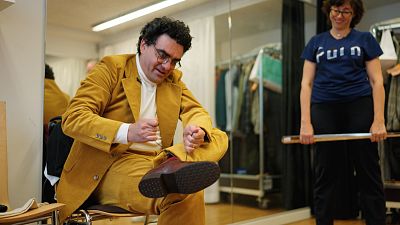 How do opera singers prepare for a role debut? The French-Mexican tenor Rolando Villazón shows us, as we follow him preparing to sing Wagner on stage, as Loge in Das Rheingold.

Entering the soul of a new character

The tenor is on fire. For the first time, he's going to perform Wagner on stage.

A new role, a new challenge, delving into character and learning a new part. A process that requires dedication, hard work, but also a lot of fun.

Months of preparation await the versatile singer, ahead of his Wagner debut in the famous opera Rheingold in Berlin.

Mostly known for his Italian and French repertoire, the tenor is about to dive deep into Germanic myth - performing as Loge, the scheming god of fire.

"When I first saw Loge, I fell in love with that role," he says. "And I said I wish one day I will be given the opportunity to sing this role, because it has never been the obvious role for me, for the language, for the type of tenor. And I really, really wanted to do it. So I'm very excited now to be in the middle of this adventure of fire."

At the Berlin State Opera, director Dmitri Tcherniakov and singers come together for the first stage and piano rehearsal. A pivotal step. The orchestra pit is empty. For now, just one piano replaces all the musicians.

"It doesn't matter if you don't play all the notes that you see," says rehearsal pianist Elias Corrinth. "you only indicate most of them. It doesn't help the singers anyway if you play all of these little notes. And all I want is to help them."

"Richard Wagner said that Rheingold is where everything originates," says Ulrike Kretzschmar, deputy director of the German Historical Museum. "It starts with the myth that gold is hidden in the river Rhine. That's the key to understanding all the other operas which then leads to Götterdämmerung, which means the twilight of the gods and then a new beginning with the people, with the citizens."

An opera about power and betrayal: a dwarf who wants to seduce mermaids, a helmet that can make people invisible and of course a ring that has the power to rule the world. Among the opera's creatures, Loge spins a web of intrigue.

"He's a trickster," says Villazón. "And we all have a trickster inside ourselves. So it's an incredibly complicated character and it's a joy to try to interpret it because there are so many facets of Loge."

It was three years ago that Villazón's Loge adventure began. For two weeks, he took a German language coach. But even for Germans Wagner's lyrics can be tricky tongue twisters.

German tenor Stephan Rügamer has sung Loge's role many times: "All those multiple and repetitive words but always differing sentences like 'Weia! Waga! Woge, du Welle' with alliteration and stave rhymes and so on... In fact, in the beginning, you manage to remember them, but as soon as the next phrase comes along which sounds just slightly different, you forget everything. I think when it comes to Wagner the most frequent mistakes are text mistakes."

After rehearsals, Villazón returns to his lodgings by taxi: "Now I go to my room and for the next 3 hours I will do all the staging again in my room. I have a chair and I re-enact everything again. There's like a body memory. And so the ideal scenario is once the dress rehearsal arrives, you are clearing what to do at every single moment throughout the journey in the opera."

Having the costume is really bringing a very important layer into the transformation of you becoming the person that you have to be on stage.

In the Berlin State Opera production, the complete cycle takes place over the last 50 years. Therefore, Rheingold's stage design and costumes are inspired by the 1970s.

"That's the look and it certainly says a lot about the costumes, the colours, the silhouettes of the costume, the wigs, the make-up," says costume designer Elena Zaytseva. "The second thing of course is that we started to think about specific images because among our characters on stage are scientists and there are also bandits"

"The costume is part of the character," says Villazón. "So having the costume is really bringing a very important layer into the transformation of you becoming the person that you have to be on stage. I mean, shoes, for example, you walk in a certain way with certain shoes. You feel the texture of the costume."

To better understand Wagner, Villazón visits in the German Historical Museum, an exhibition dedicated to the composer who still polarises like no other.

"Wagner's universe is on the one hand backwards, when it comes to the Germanic myths," says  Kretzschmar. "On the other hand, it is extremely modern. How to deal with power? Like in the Ring where the ruler Wotan doesn't want to let go of his power, even if this might break him, and who is determined to hold on to his deal until the end."

"That's what you should really look like," she says."Have a closer look. You can still say to the State Opera 'No, it has to be like that.'"

... and yet all this information helps for the creative imagination.

Villazón replies: "I think, I look a bit different though..."

"I'm so happy that I had the chance to be here and that this exhibition is currently here," he reflects. "It's all these traditions, historical documents. You know, one might ask, is it completely necessary to build a character? I would say not. And yet all this information helps for the creative imagination."

The use of the metaphor couldn't come better: The fire here, you need to become that fire and use that fire to be the fire

The day of the premiere finally arrives: October 2nd.

"For the premiere, you just need to then bring into the equation the nervousness and this thing that you feel in the stomach, the butterflies, the excitement," says Villazón.

"But also, yes, now is the moment, which is good. So you need to use that also as an instrument, that also has an element that will make you a better performer on stage. And in this case, again, the use of the metaphor couldn't come better: The fire here, you need to become that fire and use that fire to be the fire."