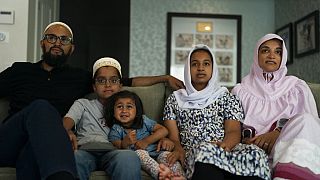 The young Pakistani education activist, who was catapulted to fame after getting shot in the head by the Taliban, condemned the film and television industry for its near total absence of Muslims.

Speaking at an event praising female creatives in the United States (US), she said: "I know that executives have passed on dozens of quality, equally amazing projects because they thought that the characters or their creators were too young, too brown, too foreign, too poor."

"Sometimes it feels like they're saying we just don't belong here."

According to the Annenberg Inclusion Initiative (AII), only 1.1% of characters in US and UK films are Muslim. In a 2021 report, which sampled 200 of the most popular films in the West, they found that an “epidemic of invisibility faces Muslim characters.”

The picture is similar across Europe.

In Germany – which has one of the largest Muslim populations in Europe – only 3.2% of those in the film and television (TV) industry are Muslim or Jewish, as per data by Citizens Europe. Likewise, in 2019, a group of artists in France signed an open letter denouncing the lack of diversity in French cinema.

Back in 1984, Jack Shaheen wrote a book called "The TV Arab" which highlighted several problems with how US TV and media dealt with Arabs, especially Muslims.

Many of these issues surrounding the representation of Muslims still remain, with Yousafzai and other public figures, such as British actor Riz Ahmed, vocally criticising the status quo.

Furvah Shah, a journalist at the Independent, offered some explanation why.

“Behind the scenes, there’s a lot of exclusivity in the industry,” she told Euronews Culture, adding this made it "much harder for people to get their foot in the door."

"There is a culture of people not really caring about our stories, and not really wanting to hear what we have to say," Shah said. "People are glossed over with stereotypes and generalisations that just aren't true."

For her, the absence of Muslims on the screen was self-perpetuating.

“When there's no representation, it sends a message that you don't belong that you're an other, an alien," said Shah."You need to see yourself on the TV to be able to know that you have a place there, that it is possible.”

But there are a number of other factors which may explain why the participation of Muslims in film and television is so low.

According to Muslim Engagement and Development (MEND), an NGO which seeks to tackle Islamophobia and get more Muslims involved with the media, “discrimination” is a big reason.

A BBC study found job seekers with Muslim names are three times less likely to be called for an interview compared to those with an English-sounding name – even when the skills and experience are identical.

Social-economic factors are also an issue, as Muslims in Europe are more likely to be from deprived backgrounds where access to quality education and services is lower.

“The film and TV industry loses amazing young people by not employing more Muslims in this field,” MEND told Euronews Culture, citing statistics that 9% of UK graduates are from Muslim backgrounds.

“This is a talent pool that the industry is missing out on,” they added.

'The Muslim experience is not monolithic'

But the problems do not stop there.

When Muslims do make it onto the screen, AII's report revealed that they are typically "racially profiled", with 58.5% staring as "immigrants or refugees", 87.8% "speaking no English or with an accent" and 75.6% "wearing clothes related to their faith."

“Stereotypes are powerful,” according to Professor Chris Berry, a cultural historian at King’s College London. “When they are disseminated far and wide through a mass media machine like Hollywood, they shape what people think they know about other kinds of people.”

“Especially if they have little direct experience of those other people, the results can be dangerous,” he added.

There are also gender-based dynamics affecting how Muslim women are represented, alongside sexual minorities.

In AII’s findings, Muslim women and girls were primarily shown on the screen as subservient, either as romantic partners or family members. Out of all 200 films in the sample, only one Muslim character was identified as LGBT+.

“We’re so tired of hearing the same old tropes about Muslim women being oppressed or about Muslim communities being violent,” said Shah. “When you constantly see that as the only representation of yourself, it can be really damaging to your self-esteem and social participation.”

“There needs to be much more diversity on screen because the Muslim experience is not monolithic,” she added.

Just under 25% of the world population is Muslim, while their large diaspora in Europe numbers 44 million, making up 6% of people in the region.

Yet things are changing, slowly.

Marvel Studios chose Pakistani-born Canadian actress Iman Vellani to portray its first Muslim superhero on screen in "Ms Marvel". Arab-American actor Haaz Sleiman also broke through the stereotype ceiling and made LGBT history too when he was cast as the husband of superhero Phastos' in "The Eternals".

Recent series such as "Dogs of Berlin" in Germany and Netflix’s "Mo" are also trying to put forward a more positive portrayal of Muslims.

This is being helped by several identity-based associations and activities that are increasingly trying to combat stereotyping and defamation in the industry, such as UK Muslim Film.

They follow in the footsteps of the US Anti-Defamation League which was established in 1913 to tackle anti-Semitism, alongside the GLAAD (formerly the Gay and Lesbian Alliance Against Defamation) fighting negative media stereotypes of the LGBTQ+ community in Hollywood.

“Such organisations operate with a carrot and a stick,” said Professor Berry. “As part of the consumer movement, they can organise boycotts and protests that can negatively affect the bottom line of media organisations."

"They can also work closely with those major organisations to try to change stereotypes and create a greater variety of images,” he added.

Yousafzai, the youngest Nobel Laureate in history, herself recently launched a production company in partnership with Apple+, aimed at promoting diversity in film and TV, while bringing Muslims' lived experiences to light.

While she praised these new shows and films as “exciting and refreshing”, Shah said the industry was still missing out on a lot by not involving this part of the community.

“There’s so much history to be told and so many voices to be heard," she said. "So much incredible storytelling.”

“It's bittersweet .. many amazing Muslim storytellers are coming up, but why are we only just hearing about them now.”