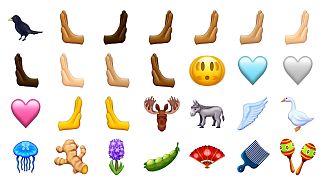 New emojis including a shaking head, the symbol for Wi-Fi and a long-awaited plain pink heart are set to hit smartphones soon.

The new line-up, which features 31 emoji in total, also includes a pale blue heart and a grey heart, various “stop” (or “high five”) hand gestures, a flute, maracas and a hair pick. More animals and plants are also on the list, including a moose, a donkey, a goose, jellyfish and ginger.

Scheduled for release in September, any draft emoji candidate that is approved for final release will come to major platforms from late 2022 into 2023, says Emojipedia.

Each emoji is subject to change prior to final approval by the Unicode Consortium, the non-profit body that sets the standard for how text is displayed and represented online.

“However, it is worth noting the majority of draft emoji candidates have ended up included on the final list over the last number of years - including every emoji we previewed from last year's Emoji 14.0 draft list ahead of World Emoji Day 2021,” said Emojipedia.

Netizens may be particularly happy with the inclusion of a pink heart emoji in this year’s draft list.

This now looks set to be included in the next Unicode release, which will likely be approved in September this year.

Telegram has a Holocaust denial problem