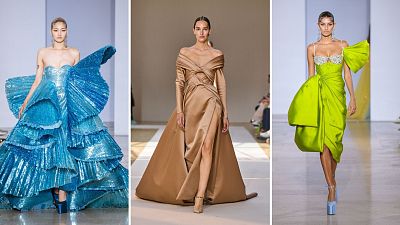 Haute Couture Week normally grabs the headlines with its daring designs but this year has been exceptionally exciting as it's the first public outing for some designers since the start of the pandemic.

Out of the 29-designers displaying their wares in the French capital this week, four are Lebanese and two opted for a presentation instead of more traditional runway shows.

Now, if you have not had the chance to visit Lebanon, then take the next available opportunity.

Why? Well dear reader, quite simply put, in my humble opinion, it's the jewel in the crown that is the Levant. Its sun-kissed Mediterranean Sea coastline is breathtaking to the Lebanese and foreigners alike. But one thing many people may not realise, Lebanon’s gift to the world is couture craftsmanship. Driving through Beirut you see dress shop after dress shop, but not all dresses are made equally of course. With several trained couture masters to choose from you can’t go wrong. Couturiers Georges Chakra, Georges Hobeika, and Elie Saab are among the stars that have shone brightly this week.

Georges Chakra who’s known to be a sharp dresser himself unveiled his collection by way of a presentation. His AW22/23 Couture collection highlights romantic youth wondering in the streets of the City of Lights, but in a cinematic way. The Arc de Triomphe and the Eiffel Tower were the iconic Parisian landmarks that provided the foundation. Bleu geode, raven, silver, cardamom, chartreuse, brick, royal blue and iridescent gold were the base materials and colours of his palette. “I was drawn by a connection with the city. This collection embodies evenings spent on zinc-covered rooftops and gazing through lacelike, wrought iron balconies. I would describe it as energetic, feminine, seductive, and wild,” said Chakra when describing the collection.

With 49 looks, the collection beats to the heart of Chakra’s design tastes, like the shimmering silver coat in faux leather or the mini skirt with sequins swinging open over it. Gowns are done in tulle, silk chiffon, and mousseline organza. One look from the collection that gives a nod to Paris is the banding. “A recurring theme throughout the collection, each band is molded and fitted, and hand woven into elaborate coils, offering a nuance to the graceful ironwork of Paris balconies,” is how the house described the look. And the jacket made from complex velvet tubes carefully twisted with tiered silk faille sleeves added drama. The bridal gown was done in a column style of rose gold lace with tinsel sequins enclosed in cream tulle, and the Duchesse satin train was a work of art and captivating.

Chakra was extremely happy to be back in Paris to meet people. “It is very exciting because we can interact with the clients and the press, and they can really experience the collection live.

This season saw a return of Georges Hobeika to physical runway shows. He hasn’t been seen in Paris since the pandemic began; and he just named his son, Jad Hobeika, co-creative director. The father and son duo didn’t disappoint.

“This couture collection embodies the soul of the house: Nature. This season, we are tackling this topic in a different way; where love, acceptance and the desire to thrive derive from an endless world of “Eternal Gifts”, like water, sun, air and the pure sensation of being alive. I would say a calm explosion of passion, creativity and colors,” said Georges.

Taking six months to complete the opening look was a strategic move to set the tone for the rest of the collection. A silver mini-dress, complete with spikes circling around the bodysuit, was used to illustrate that self-expression and inspiration is important during this time. Mediterranean blues, peachy oranges, yellow, fuchsias, pistachio green, and pink took pride of place throughout the show, with many items adorned with crystals, feathers, and some pieces cut out in futuristic shapes.

“It feels great to be back! The brand is back with so many great surprises and elaborate creativity. We enjoyed making this a great experience for every fashion enthusiast and creatives out there!”, Georges explained with excitement.

Elie Saab’s big breakthrough came when American actress Halle Berry wore his red embroidery gown to the Oscars in 2002 when she won a Best Actress Academy Award for Monster's Ball. Since then he has been dressing Hollywood and those in the music industry for red carpet events. But here's the thing, Saab is best known for clothing women, but at his Couture show this week in Paris, he broke out a myriad of men’s looks.

Held in the Carreau du Temple, “The Beginning of Twilight,” the collection’s theme was unveiled with American fashion stylist, Law Roach, in the audience. The twilight of the early morning, “the last instance of suspended calm before the stars begin to flicker awake,” noted the house. And the colors and hushed sounds of twilight also inspired Saab in creating the collection. Blues, blacks, nudes, golds, reds, gray and pinks were the colour palette. The looks for the men were in regal robes, but more like bisht robes that men wear in the Middle East for formal events, or kimono-esque tones in others. The cuts and sharp tailoring in these robe ensembles exuded masculinity at its highest.

For the women, feminine designs highlighted the female silhouette, from majestic shoulders to sculpted legs. Capes and floor flowing sashes exuded grace, while contouring chiffon cutouts offered a unique element to gowns. One of Saab’s best collections, it was both captivating and awe-inspiring.

Dyeing for fashion: Why our clothes are so bad for the environment