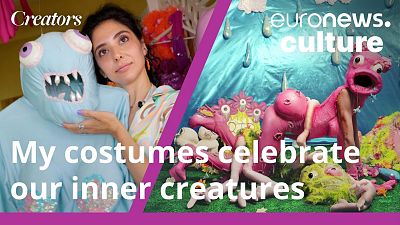 Nestled in the heart of Istanbul’s Ortakoy neighbourhood is a portal to another world. Colourful and chaotic, Eda Yorulmazoglu’s studio is a reflection of the world she’s lovingly nurtured since she began designing costumes in college.

“The world I’m trying to create - for myself at least - is something different from our world,” she says. “There’s no judgement, no religion, no skin tone, no gender, no language really either.”

It’s a world populated by the benevolent creatures she’s given birth to over the years, under the professional name Eda Birthing.

Some of them have bulbous eyes and jewels for teeth. Others, like the ones in her collection “My Perfect Nuclear Family,” have blond hair spilling from their mouths. Often, they have long, dangling fingers or extra appendages.

“I like to create things that are other than humans,” Yorulmazoglu says. “Because when you use humans you start to judge yourself. You say, ‘I can’t afford that,’ or ‘I’ll never look good in that.’ And you start to body shame yourself. When people come to my shows, I don’t want that.”

Yorulmazoglu got her start in the United States, where she studied fashion design at the School of the Art Institute of Chicago. The Turkish-American designer made a name for herself by designing out-of-this-world garments for some of the city’s top drag queens.

She says she was introduced to drag somewhat accidentally, when she was invited to design for a group of queens during her last year of college.

“That night I understood where I had to be,” she says. “It was just so beautiful watching them put my garments on and change the movement and go into that character. And I was just in love because they accepted me for who I was and they didn’t want to change anything.”

Since then, Yorulmazoglu’s work has been featured multiple times on the award-winning US reality television series RuPaul’s Drag Race. She says she regularly receives commissions from queens.

“Working with drag queens, they give me a lot of freedom with my designs, even commissions,” she says. “I’ve had people just say, like pink or red, or I’m afraid of spiders. Sometimes it’s more specific, but most of the time it’s very minimal detail. And I’m like, okay, let’s try.”

The goal with all of her designs, she says, is to give people permission to be fully themselves. She’s noticed that sometimes people who wear her garments “realise something about themselves that they hadn’t before.” At an event in Chicago, for example, she saw a group of businessmen tear off their suits and jump around in a giant creature tent she built.

“They became children again,” she says. “I think that’s something we forget when we grow up, obviously, is how to be a child, how to be carefree. That’s what I want to bring back.”

After years in Chicago, she’s brought that philosophy to Istanbul. In what turned out to be another happy accident, Yorulmazoglu ended up getting trapped in the city in March 2020 when the Covid-19 pandemic froze international travel.

“After a month or two of being in Turkey, I kind of just said, maybe this is a sign that I have to stay here,” she says.

At the start of June she presented a new 12-look collection called “Magical Births” at Blind Istanbul, which she said was a chance to “grab any creative I could find” including singers, drag queens, pole dancers and DJs. Her goal for the future is to continue organising more events, and eventually to take her work beyond costumes.

“I want to build the world, so people can really feel what I’m doing,” she says. “Whether that’s in film or in real life, like a park or a house or something.”

She points to the short film “Glimmer of Us,” which she released last year with Chicago-based film collective Bitchcraft. It tells the story of an innocent pink creature (played by Yorulmazoglu) who enters the world afraid and alone and is welcomed by a group of drag queens dressed to the nines in Yorulmazoglu’s neon costumes.

After timidly watching them all dance and have fun, the creature works up the courage to dance on the pole - in a final scene bathed in bubble-gum pink light that oozes pure joy, embodying the feeling of finally finding a place where you belong.