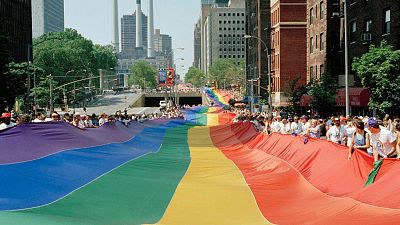 A mile-long rainbow is carried past the United Nations secretariat building during a march to commemorate the 25th anniversary of the stonewall riots Sunday, June 26, 1994   -   Copyright  AP Photo
By Jonny Walfisz  & Tim Gallagher  •  Updated: 30/06/2022

As Pride Month comes to a close, global corporations are concluding their campaigns.

From media outlets to tech firms, it seems most major brands now wrap themselves in rainbows for the month of June.

But should big business really be involved in Pride Month? And with sponsorship deals and rainbow branding now so common, is Pride’s protest message still getting through?

How did corporations get involved in Pride Month?

Brands haven’t always been so willing to show support for the Pride movement. In fact, in many countries there once would have been severe legal ramifications for businesses promoting homosexuality.

In the UK, homosexuality was illegal until the 1967 Sexual Offences Act, which decriminalised some homosexual acts in England and Wales, but only those that took place in private.

The history of businesses seeking to attract LGBTQ+ clients stretches back much further though, says Dr Justin Bengry, lecturer in queer history at Goldsmiths, University of London.

In fact, according to Bengry, the British publishing industry courted a queer male readership as early as the 19th century.

During his research, Bengry uncovered memos and internal documentation which discussed the economic potential of queer customers.

“There’s a very long history of engagement with queer people, even if they weren’t named as such,” he explains.

“There’s a grappling with how to address this group of consumers when the language around identifying what we would today call the LGBTQ+ community was unclear, even to the community itself.”

Bengry points out that queer business ownership played an important role too.

“We also shouldn’t discount too quickly the fact that there were a lot of businesses owned and operated by queer people, either in service of our community, or who recognised that other queer people were a potential market that they could well exploit,” he adds.

The curious case of Men Only magazine

While there was little to no overt marketing to the queer community until gay liberation in the UK, Bengry notes the interesting case of male lifestyle magazine “Men Only” in the 1930s.

The magazine managed to play to both a straight and gay male crowd without alienating either.

“They did it by including a lot of queer visual content,” Bengry explains.

This wasn’t a small magazine either, in fact it attracted contributions from the likes of Winston Churchill, running political commentary alongside fashion advice.

The power of the ‘pink pound’

The collective economic power of the LGBTQ+ community would only grow in the coming decades.

“By the mid-1960s, you start to see some published work in which queer people are saying, ‘Hey, we’re actually not an insignificant part of the population and if we withdrew our purchasing of these publications, they would feel that. Maybe we should start using our economic power in a coordinated way,” Bengry says.

It wouldn’t be until the 1970s that this economic power would truly be recognised though, when controversial anti-gay rights activist and singer Anita Bryant became the face of Florida’s orange juice industry.

Her successful bid to get new anti-discrimination laws - which prohibited discrimination based on sexual orientation - overturned, led to a mass boycott of orange juice in the US.

The following decade also saw the first major ad campaign directed at the gay community, when Absolut Vodka placed ads in two gay magazines, “The Advocate” and “After Dark”.

The brand has remained consistent in the 41 years since, proudly marketing to the queer community. With campaigns including “Kiss with Pride” in 2017, which celebrated queer people living in the 72 countries where same-sex relationships were still illegal. Not to mention their sponsorship deal with Ru Paul’s Drag Race.

How to do it right (and wrong) today

While Absolut Vodka have been consistent in their marketing, since the birth of social media, a more mobilised queer community has seen to it that insincere campaigns during Pride Month are now quickly uncovered and critiqued.

The company’s contributions to politicians that support “abstinence-only” sex education and privatised care was also seen as at odds with supporting HIV/AIDS charities.

“Criticism is always going to happen,” says Hunter Johnson, CEO of Xpedition, a production company that has worked with multiple corporations on their Pride campaigns, including Google’s 2018 campaign.

“Anytime a leader decides their brand is going to do a Pride campaign and they’re not part of the LGBTQ+ community, they don’t realise that it’s a lot of people that are very diverse and differently opinionated,” he explains.

With even Trump changing his “Make America Great Again” logo to a rainbow colour scheme, Johnson thinks it’s crucial that companies actually stand beside the LGBTQ+ community for Pride campaigns.

“It’s always got to start internally from the employees,” he says. “If you launch a campaign and you’ve not got an employee culture that’s healthy, they’re going to be the first ones to tell you.”

Some of the basics that companies need to take on board before they start waving a Pride flag are to make sure pronouns can be on email signatures, create gender neutral bathrooms, and donate to LGBTQ+ organisations.

Can a corporate Pride campaign ever be sincere?

Some people will argue that all corporate Pride campaigns have a fundamentally cynical edge, but Johnson believes that with brands making up such a large part of our lives now, the impact of a campaign can be huge.

“I grew up playing sports, and I was so scared of being myself and having a crush on one of my teammates,” Johnson explains.

“When Nike came out with their ‘Be True’ campaign and said ‘hey, you’re welcome here’ it was the first time I felt that I was just as good as any basketball player out there.

“Brands have incredible power to lift and inspire.”

What about corporate marches?

While the situation in corporate boardrooms may be getting more complex, circumstances on the ground have changed beyond recognition.

Pride events, which began as grassroots, political protests, have now become large festivals with tens of thousands of attendees.

Before the pandemic, Berlin Pride drew crowds of 500,000, while in Barcelona 400,000 revellers partied next to the Montjuïc fountains in Avinguda Maria Cristina.

Such events come with big production values and hefty price tags, so inviting sponsors becomes a necessity, though not always a comfortable one.

The issue of controversial sponsors came to the fore during London Pride in 2018, when official sponsors Virgin Atlantic and British Airways were widely condemned for supporting the deportation of LGBTQ+ refugees.

Meanwhile, at ticketed Pride events, prices regularly raise eyebrows. At Manchester Pride in 2021 an outcry greeted the announcement that tickets would cost a whopping £71.

Perhaps even more controversial was that for-profit events went ahead, while the annual parade was cancelled due to COVID-19 restrictions, and ultimately replaced by a number of marches not open to the public.

“That to me didn’t feel like what Pride is about,” says John Proctor, “The whole point of Pride is being seen and being visible.”

The cancellation of the parade coupled with reduced contributions to local LGBTQ+ charities spurred Proctor, who lives in Manchester, to organise a protest march of his own.

Initially planned with his friends, Proctor imagined that maybe a 100 people would attend, in fact the final headcount was in the thousands.

“I think there’s a tension as Pride gets bigger. You want it to be a big celebration but the danger of that is it risks becoming disconnected from the people it's there to serve.

“They need to make sure that the community is at the heart of it and driving decisions.”

Similar events to Proctor’s have been held in Copenhagen and Gallipoli, where crowds march down the Italian coastline to swim in the Ionian Sea. Manchester Pride meanwhile is in an ongoing consultation process with locals regarding its future direction.

“For me it’s very important that Pride is political and it always has been,” says Proctor.

“I think it’s really important that those parades aren’t just parades and they are political protests that have a purpose.”