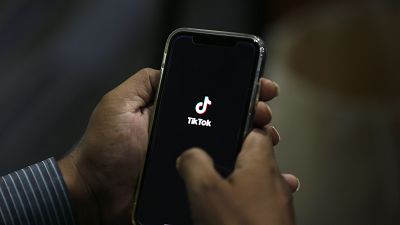 A recent TikTok trend in France is claimed to be encouraging self-harm and even suicide.

As press outlets, the French government and other social media users react with fear and outrage, just how dangerous is this trend and others like it?

The latest TikTok trend in the spotlight is the #LabelloChallenge. Using the name of a popular lip balm brand in France, the social trend supposedly began as a challenge to guess the scent of a lip balm on another person.

The innocent idea took a dark turn when TikTok posts began to appear discussing a version of the challenge that called for people to remove a piece of their lip balm every time they felt sad. When the lip balm is finally finished, the person is supposedly meant to self-harm or commit suicide.

Word of the #LabelloChallenge spread around France with over 12 million views of the tag on TikTok at the time of writing. After hearing about the challenge, many of the platform's users started posting videos warning others against taking part.

No public reports of deaths have been associated with the challenge and it is hard to establish how many posts discussing or promoting this version of the challenge were posted. Those that were are now drowned out in warning videos.

"Like with most TikTok challenge panics, actual videos endorsing the "challenge" are difficult to find but awareness videos are everywhere," tweeted Abbie Richards, a TikTok disinformation researcher.

In a statement to Euronews, TikTok denied the existence of this particular challenge.

"At TikTok, the safety and well-being of our community is our priority and we have not found any evidence that such a trend exists. As part of our commitment to keep our community safe, our review will continue and should we find content that violates our policies, it will be removed."

But the French government took the challenge seriously and posted a warning to parents on Twitter. The Ministry of the Interior posted a video with recommendations to teens and parents about what to do if you have mental health concerns following trends like #LabelloChallenge.

The #LabelloChallenge isn’t the first TikTok trend to get the public concerned about the safety of children using the platform.

A previous challenge, #BlackoutChallenge, is accused of being the cause of death of a 10-year-old girl in a 2022 lawsuit in the US. The challenge encouraged people to choke themselves to the point of unconsciousness.

TikTok is accused of unsafely pushing the trending challenge in Nylah Anderson’s feed. She died after being found unconscious in her bedroom following use of the app.

Reporting in the media: fear and hysteria

TikTok conducted a survey of over 10,000 teens, parents and teachers after concerns about online challenges.

“We can differentiate between two types of targets or potential victims of these challenges,” explains Marion Haza, clinical psychologist and lecturer at the University of Poitiers.

“Teenagers who are doing well (who represent about 9 out of 10 teenagers) may have a critical mind towards challenges, especially challenges that involve harming themselves or even suicide.

“They will be able to resist them, talk about them, criticise them, not carry them out or carry them out to a lesser extent with a knowledge of the risks linked to this challenge.”

“On the other hand, teenagers who are already in pain, those who are already hurting themselves, who attempt suicide, who self-harm, who run away, who drink massively, etc., will be more at risk when faced with a challenge on the networks. It gives them a new opportunity to continue to hurt themselves, sometimes with new ideas,” she says.

For the ‘at risk’ category of teenagers, Haza is particularly concerned about the role the media has in perpetuating damaging challenges. It’s a topic close to Haza’s work. She recently co-authored a book which discusses the way digital urban legends appear, without any clear source.

“Personally, while I work with teenagers and professionals working in institutions for teenagers, I had not heard of this challenge before seeing articles in the newspapers,” she says. “That's why it's really important in the media not to give out the recipes for harm by disclosing the content of the challenges themselves, even if the aim is prevention.”

“We need more critical news coverage. So much starts with a clickbait story that doesn’t say ‘this is happening’, just that people are saying it’s happening,” she says.

Richards specialises in understanding how misinformation, conspiracy theories and extremism spread on the platform.

“We have cultural anxieties about sexual assault, school shootings, child suicide. Any challenge that fits a major cultural anxiety fills the role of a conspiracy theory in a certain way. It offers a simple answer for why those things happen,” she says.

Worrying about the challenge itself may be missing the bigger picture about mental health in young people, argues Richards.

Parental fears that a challenge could result in suicide are misplaced, she suggests. “It's kind of a broken way of thinking about mental health and self-harm,” she says.

“If we all just stop for a minute and think about whether we would do that. Would you really take your life because of a game? Or is there a bigger problem going on? Is self-harm being encouraged by a chapstick ending? Or is this maybe a meme that then is easier to blame than understanding the root causes of the problem?”

Richards believes the origin of the meme is likely from a section of TikTok called #PainHub. “It’s really just a loose, broad category for venting emotional pain. Whatever you're feeling, it could be self-harm, eating disorders, or it could be that you were cheated on. It’s a lot of the things that teenagers might be feeling,” Richards says.

At the time of writing, the PainHub hashtag had over 14 billion posts on TikTok.

Although the idea of PainHub might be alarming, Richards suggests it may play an important role in giving teens who are going through difficult emotional times a safe space to express themselves.

“These places provide support and community for one another, especially when a lot of these kids don’t feel like they have anybody else they can talk to,” she says.

Richards believes that while the Labello Challenge may worry parents, if their children are mentally unwell, it is not necessarily the fault of a TikTok trend. Instead, parents should focus on addressing mental health issues and educating their children, instead of simply blaming social media.

“Peer prevention works much better than adult prohibition, especially in adolescence where prohibition often leads to transgressive curiosity. It is much more important to get adolescents to think about what happens in their group relationships, how to say no, the issue of consent and manipulation rather than advocating a prohibitive message about certain behaviours related to a specific challenge.”

The fear parents and the media have specifically about TikTok is rooted in a fear seen throughout history, says Richards.