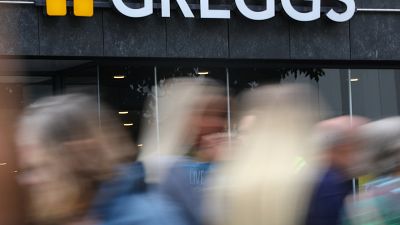 With the Greggs/Primark high-street collab we ask, what are some other unusual brand bedfellows?   -   Copyright  PHIL NOBLE/REUTERS   -
By Tim Gallagher  •  Updated: 10/02/2022

The news of UK fashion-retail chain Primark and beloved British bakers Greggs going into business together left many wondering what would come of this alliance between fast fashion and fast food.

Little is known about the goods themselves but pictures have emerged that tease a hoodie bearing the Greggs logo with “It’s a Pastry Thing” emblazoned down one arm.

In an age where branding transcends product and cross-overs can generate massive social media buzz, many are keen to create money, memes and some memorable designs through unexpected pairings.

So whether it's kitchen wear and couture or tinned meat and streetwear, let's examine some of the oddest couples of recent years.

With the tragic death of Virgil Abloh earlier this year many took stock of his chic back catalogue that brought together high and low culture.

“MARKERAD” was the love child of Abloh’s fashion label Off-White and flatpack furniture aficionados, Ikea. The collection was, typically for Abloh, inspired by his childhood memories and relationship to furniture and was teased for months before it became available in stores across Europe and North America.

At the time of his collection’s release in the US, Abloh told High Snobiety, “No one wants to look exactly like anyone else. It's like streetwear where everyone styles themselves with their own sensibilities.

“I thought very much the interior of your house can be adaptable.”

Not since Romeo and Juliet has there been as an unlikely pairing of famous Italian names as haute couture designers Dolce & Gabbana and white goods manufacturer Smeg.

In 2017 the Smeg/D&G cabal released a limited edition line of 100 stylish fridges for Salone Del Mobile, a furniture fair in Milan which is held annually to promote Italian exports. The fridges, which came in at around €43,000 each, proved so popular that the brands decided to try it all over again.

The following year Smeg/D&G released a more affordable (emphasis on more, not affordable) line of juicers, toasters, coffee machines, teapots, blenders and mixers. All the goods were intricately decorated with floral, leaf and fruit inspired patterns to add some mediterranean colour to any kitchen.

What more natural partnership could there be than between sun-soaked Californian streetwear and a hardy tinned meat that helped win World War Two?

This relationship saw the American classic Spam honoured by top streetwear label of the San Francisco Bay Area HUF. The coupling spawned a capsule collection that left many style tastebuds titillated if a little bemused.

Mimicking a military theme that honours Spam’s role in feeding the US, UK and Russian troops in the 1940s, the tinned meats label was applied to jackets, mesh football jerseys, hats and socks. Although tongue-in-cheek, Spam is still available in supermarkets around the world, so maybe HUF are hoping these designs could prove as long-lasting.

Although Scott’s reputation has been somewhat sullied by recent events he was once considered an asset to any brand.

Already renowned for his successful flogging of merch, Scott was signed up by McDonald’s in 2020 as the first of many celebrities including Mariah Carey and BTS.

Hoping to add a bit of Cactus Jack magic to the menu, McDonald’s made Scott’s favourite meal of a Quarter Pounder with cheese and bacon, fries with BBQ sauce, and a Sprite available for customers. In a more bizarre turn, the fast-food chain and rapper also released a cushion in the image of a giant chicken nugget, which raised eyebrows as high as the real thing would get your blood pressure.

Whilst not technically a collab Durex did partake in a time-honoured Olympic tradition. The Olympic Village has been described as “the most testosterone fuelled place on earth,” by target shooter Mark Russell, and there is no shortage of rumours and innuendo surrounding the athletes' accommodation during the games.

For the 2016 Rio Olympics Durex sent 450,000 condoms to the village, 3x the amount sent to London in 2012. These ‘camisinhas’ (Brazilian for ‘little shirts’) were in theory so high in number due to the spread of the zika virus, but considering the number sent to Seoul in 1988 was 8,500 it seems a little excessive.

Lady Gaga may have missed out on an Oscar nomination but she's made our list after she teamed up with Oreo in 2020. That year, ‘Chromatica’ brought joy to many even if the irony of an album full of club bangers being released at the height of lockdown was bittersweet.

However, the internet got a second wind with the release of a tasty treat designed to promote the singer’s work. Oreo’s bright pink Chromatica cookies had green cream filling and came in packages embossed in a range of colours inspired by the album.

The goods, available for a limited time in the UK and US, set the internet on fire with many life-long Little Monsters stating they’d queue up for their pop-fuelled sugar rush.