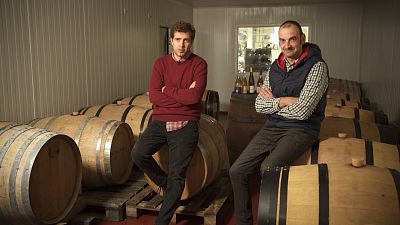 Radostin and Peter are the founders of Georgiev/Milkov wine production. Embodying a new generation of Bulgarian winemakers, they hope to bring fresh ideas to Bulgaria's wine industry, while remaining rooted in their country's winemaking traditions.

The partners began their venture just for fun in 2014 with no real idea of how to turn their passion into a proper business. Unable to buy their own vineyard, they decided to embark on a journey of discovery by exploring Bulgaria's different wine making regions. They were convinced the moment had come for many local grape varieties to finally get the attention they fully deserved.

“We did not choose large amounts – says Peter - because it was just an experiment. We selected a couple of rows of vines and we started producing two barrels of Rubin and Mavrud red varieties.”

Radostin’s passion grew stronger, especially as a teenager, having produced his first wine, with his father and grandfather, at the tender age of eight. In contrast, Peter developed his knowledge and curiosity for winemaking on his own.

...wine production needs to express the nature of the soil and its fruits

Rodostin and Peter would meet while training at the University of Plovdiv. During a night shift at a local winery they discovered their mutual passion, but it was only later that the longtime friends teamed up, having gained experience on vineyards in other parts of the world, including the US, New Zealand, China, Austria and Malta.

“The philosophy we’re trying to stick to – explains Radostin - is that wine production needs to express the nature of the soil and of its fruits, and to avoid as much as possible technological intervention that would change how the wines taste.”

For instance, they use Red Misket grapes to make either a classic white of a sparkling wine, the so-called 'pét-nat' (“pétillant naturel” - a French term that roughly translates to “naturally sparkling”).

Despite its name, Red Misket is used for the production of high-quality white wines. It is an ancient Bulgarian grape variety which is common across Bulgaria, but barely found anywhere else in the world.

Georgiev/Milkov creatively also use “pét-nat” method to vinify the red Mavrud. The origins of this grape variety are found near the city of Plovdiv, in the Western Thrace wine region. The name Mavrud derives from the Greek “mavro”, which means black.

Radostin and Peter say their winemaking has developed from being just a passion to a way of life.

“These bottles represent my entire life as it's something we do every day. And at the end of the day, anyone who opens this bottle tastes a part of us,” Peter says.

For Radostin, every bottle of wine provides a taste of the land it comes from - especially for anyone living outside Bulgaria.

Melania Trump latest celebrity to cash in on NFTs