As "intense street to street fighting" is reported in Sievierodonetsk, Ukraine says Russian forces are planning an assault on Sloviansk as the battle for the Donbas continues.

See a summary of the latest developments in our blog below.

Ukraine remains in control of the Azot chemical plant in Sievierodonetsk where hundreds of civilians are sheltering, the region's governor said on Saturday, after a Russia-backed separatist claimed 300-400 Ukrainian fighters were also trapped there.

"The information about the blockade of the Azot plant is a lie," Serhiy Haidai, governor of the Luhansk region partially controlled by pro-Russian separatists, said on the Telegram messaging app.

"Our forces are holding an industrial zone of Sievierodonetsk and are destroying the Russian army in the town," he wrote.

Sievierodonetsk, a small city in the region, has become the focus of Russia's advance in eastern Ukraine and one of the bloodiest flashpoints in a war now into its fourth month.

Neither side has secured a knock-out blow in weeks of fighting that has pulverised the city into rubble.

Ukraine has said some 800 people were hiding in several bomb shelters underneath the Azot plant, including about 200 employees and 600 residents of Sievierodonetsk.

Rodion Miroshnik, a Russian-backed representative of the self-proclaimed Luhansk People's Republic, said on Saturday that 300 to 400 Ukrainian fighters were blockaded on the grounds of the plant along with civilians and had tried to negotiate their passage to the city of Lysychansk.

"Such demands are unacceptable and will not be discussed," Miroshnik said, adding that negotiations with fighters about civilians at the plant were under way.

Ukraine has appealed for swifter deliveries of heavy weapons from the West to turn the tide of the war with Russian forces - which it says have at least 10 times more artillery pieces than Ukrainian forces. Yet even when outgunned, Ukraine's army has proved more resilient than expected in early phases of fighting.

"We are definitely going to prevail in this war that Russia has started," President Zelenskyy said on Saturday.

A senior adviser in Ukraine's presidential office has insisted his country was ready for war against Russia.

Mykhailo Podolyak did not mention Joe Biden by name, but his comments on Twitter follow the US president's remarks claiming that President Zelenskyy "didn't want to hear" US intelligence reports that Russia was planning to invade.

Ukraine had been planning for the invasion since last year, he said: "We‘ve known about the invasion not only from Western, but also by our intelligence."

"If we had started getting heavy weapons in January, the situation could have been different," he added.

The family of a British man condemned to death for fighting for Ukraine said it is devastated by the outcome of what it termed a “show trial" and called Saturday for him to be released and accorded the treatment an international human rights convention guarantees prisoners of war.

A court in the separatist-proclaimed Donetsk People’s Republic of Ukraine convicted two British fighters and one Moroccan on Thursday of seeking the violent overthrow of power, an offense punishable by death in the eastern territory controlled by Moscow-backed rebels.

The men were also convicted of mercenary activities and terrorism.

“Our whole family is devastated and saddened at the outcome of the illegal show trial,” the family of one of the British men, Shaun Pinner, said.

A statement issued by Britain’s Foreign Office on behalf of Pinner's family said the 48-year-old had been a resident of Ukraine for four years.

“We sincerely hope that all parties will cooperate urgently to ensure the safe release or exchange of Shaun. Our family, including his son and Ukrainian wife, love and miss him so much and our hearts go out to all the families involved in this awful situation,” the statement said.

The family also described Pinner as a proud “contracted serving marine in the 36th Brigade,” a Ukrainian naval infantry division that helped defend the besieged southern port city of Mariupol before it was captured by Russian forces.

As a member of the brigade, Pinner “should be accorded all the rights of a prisoner of war according to the Geneva Convention and including full independent legal representation,” the family said.

Ukraine and the West have denounced the proceedings in the unrecognized Donetsk republic as a sham and a violation of the rules of war.

"We want to support Ukraine in its European journey," von der Leyen said at a short press conference following her meeting with Zelenskyy, as fighting continued in the east.

"The discussions today will enable us to finalise the assessment by the end of next week," she added, stressing that the Ukrainian authorities had "done a lot" towards a candidacy, but that there was "still a lot to be done", especially in the fight against corruption. (AFP) 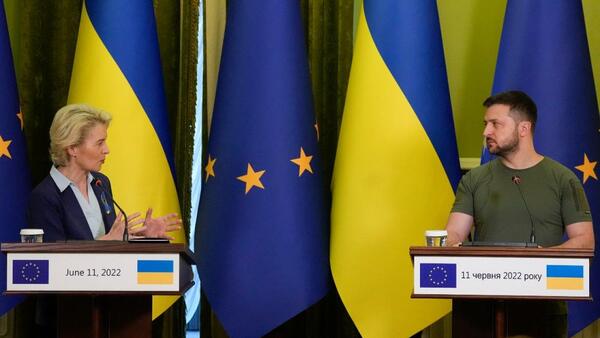 euronewsThe EU Commission president, visiting Kyiv, said the EU would be able to finalise its assessment "by the end of next week" over Ukraine's membership bid.
14:07

The Russian Defence Ministry said on Saturday that its air defence forces had shot down three Ukrainian war planes.

The Russian military shot down two MIG-29 planes in the Mikolayiv region and one Su-25 fighter jet in the Kharkiv region, the ministry said in a statement.

The Ukrainian army said Saturday that Russian forces were regrouping to launch an offensive on the Donetsk province city of Sloviansk.

Moscow-backed rebels have controlled self-proclaimed republics in both Donetsk and Luhansk since 2014, and Russia is trying to seize the territory still under Ukrainian control.

In its regular operational update, the General Staff of the Armed Forces of Ukraine said Russian soldiers managed to get a foothold overnight in the village of Bohorodychne, 24 kilometers (about 15 miles) northwest of Sloviansk, and were preparing to attack the city.

The Donetsk regional police said Russian missiles hit 13 towns and villages in the province overnight. In a statement, the police said that civilians had been killed and wounded, without specifying numbers. Donetsk and Luhansk make up the Donbas,

The Ukrainian army's update said that the threat of missile and airstrikes on Ukraine from Belarus remains, noting that the Belarusian government extended military exercises along the Ukrainian-Belarusian border until June 18.

A Czech national has been killed in Russian-occupied eastern Ukraine, Czech Foreign Minister Jan Lipavsky said in Prague on Saturday.

"The body of the man should be brought tomorrow to the Kharkiv region," Ukraine's second-largest city on the frontline between Ukrainian and Russian forces, the minister told reporters after meeting his Turkish counterpart Mevlut Cavusoglu.

Czech journalist Lenka Klicperova, who first reported the man's death on Friday, said he was a volunteer fighter, identified as Michal J.

This is the second Czech victim of the war launched in Ukraine by Russia on 24 February.

In May, Prague confirmed the death of a Czech truck driver who had been missing since early March. He had been shot and buried by the roadside.

Russia on Saturday handed out its first passports to residents of Kherson, a city occupied by Moscow troops in southern Ukraine, Russian news agencies reported.

According to the official TASS news agency, 23 Kherson residents were given Russian passports in a ceremony, a "simplified procedure" made possible by a decree signed by Russian President Vladimir Putin in late May.

"All of our Kherson residents want to obtain a passport and (Russian) citizenship as soon as possible," Vladimir Saldo, the head of the region's pro-Russian administration, was quoted by TASS as saying during the ceremony.

"This is a new era for us (...) It is the most important document a person has in his life," he told the Ria Novosti agency.

According to the pro-Russian authorities in Kherson, the date for issuing the first Russian passports was chosen to coincide with Russia Day, 12 June, a holiday celebrating the country's independence.

The Kherson region was almost completely conquered by the Russian army at the beginning of its offensive launched on 24 February. The decree signed by the Kremlin at the end of May, authorising pro-Russian local authorities to hand out passports to the inhabitants, also concerned the Zaporizhzhia region, which is partly controlled by Moscow.

TASS also reported that Russian forces occupying the southern Ukrainian city of Melitopol began handing out Russian passports to residents. Melitopol is outside of the Donbas in the Zaporizhzhia region.

Ukraine had denounced the introduction of this special procedure as a "flagrant violation" of its territorial integrity.

"The Russian presidential decree is legally null and void and will have no consequences" on "the citizenship of the inhabitants of the territories temporarily occupied by Russia", the Ukrainian Foreign Ministry said.

The office of Ukraine's prosecutor general said on Saturday that it has learned about the deaths of 24 more children in Mariupol, the southeastern port that was besieged for weeks before Russian forces captured it in mid-May.

"During the recording of criminal offences, it has become known that 24 more children died in Mariupol, Donetsk region, as a result of the indiscriminate shelling by the Russian military," the office said on the Telegram messaging app.

"These figures are not final, as work is underway to establish them in places of active hostilities, in the temporarily occupied and liberated territories."

Reuters was not able to independently verify the report.

The mayor of Mariupol - reduced to ruins by the siege – said there was on outbreak of cholera in the city as sanitation systems were broken and corpses were rotting in the streets.

Nearly 800 children have been killed or injured in Ukraine since the beginning of Russia’s invasion, Ukrainian authorities said Saturday.

According to a statement by the Office of the Prosecutor General of Ukraine, at least 287 children died as a result of military activity, while at least 492 more have been injured. The statement stressed the figures were not final and said they were based on investigations by juvenile prosecutors.

The officer said children in Ukraine’s Donetsk province, which together with Luhansk makes up the Donbas, suffered the most, with 217 reported killed or injured, compared with 132 and 116, respectively, in the Kharkiv and Kyiv regions.

For a summary of Friday's developments in the war in Ukraine, click here.