As the Ukrainian parliament ratified two presidential decrees to extend martial law in the country, Kyiv ruled out a ceasefire or concessions to Moscow while Russia intensified an offensive in the eastern Donbas region, waging a major offensive in Luhansk.

The Russian army is attempting to seize the cities of Sloviansk and Sievierodonetsk, but Ukrainian forces held off their advance by Sunday.

See a summary of the day's developments below.

Between 50 and 100 Ukrainian soldiers may be dying every day fighting in “the most difficult direction,” or the country's east, ​President Volodymyr Zelensky said during a press briefing on 22 May 22.

Although Ukraine does not reveal its casualties, Zelenskyy said in mid-April that between 2,500 and 3,000 Ukrainian troops had been killed by that point.

Any kind of a fast track to Ukraine's EU membership was excluded in the short term, French officials repeated on Sunday.

"We have to be honest (...) If we say that Ukraine will join the EU in six months, one year or two years, we are lying. It is not true. It's probably 15 or 20 years, it's very long," said French Minister for European Affairs Clément Beaune.

On the other hand, the European political community proposed at the beginning of May by President Macron is "complementary to the EU" and "can offer a political and concrete project to countries that are not in the heart of the EU and that want to get closer to us", the minister assured.

The proposed community would most likely include Ukraine, Moldova, and Georgia -- who all submitted their application for EU membership since Russia's 24 February invasion -- but also countries of the Western Balkans, which have been waiting to become bloc members for decades.

The prospect of a union parallel to the EU was coldly welcomed in Kyiv and has proven to be divisive in the bloc itself.

On Saturday, President Zelenskyy was also clear in his intent to push for his country's membership in the union as soon as possible, saying: "We do not need alternatives to Ukraine's application to the EU, we do not need such compromises."

The world cannot return to 'business as usual' with Russia after its invasion of Ukraine, Duda says

Polish President Andrzej Duda said on Sunday that "business as usual" with Russia was now impossible after the discovery of massacres of civilians in Ukraine blamed on Russian troops.

"After Bucha, Borodyanka, Mariupol, there can be no more 'business as usual' with Russia," he said in a rousing speech to the Ukrainian parliament in Kyiv -- the first by a foreign head of state since the start of the Russian invasion on 24 February -- interrupted several times by standing ovations.

Hundreds of civilian bodies have been found in Bucha and Borodyanka, towns near Kyiv occupied and then abandoned by the Russian army.

The city of Mariupol, in southeastern Ukraine, is in ruins after three months of siege and relentless shelling that has killed at least 20,000 civilians, according to Ukrainian authorities.

"An honest world cannot return to the agenda by forgetting the crimes, the aggression, the trampled fundamental rights," the Polish president added, also in the presence of his Ukrainian counterpart Volodymyr Zelenskyy.

"I thank you for defending Europe against the invasion of the barbarians and the new Russian imperialism," he said, saying that "Russia had not achieved any of its strategic objectives" in Ukraine.

The Ukrainian government has extended martial law and general mobilisation in the country at war since its invasion by Russia at the end of February for another three months until 23 August.

In two votes, the Ukrainian parliament, the Rada, approved the presidential decrees on martial law and general mobilisation by an absolute majority on Sunday.

Ukrainian President Volodymyr Zelensky signed the two decrees on 24 February. They have already been extended twice for one month.

Nearly three months after the start of its offensive, Russia continued its bombardment of the Donbas in eastern Ukraine on Sunday.

After failing to take control of the capital Kyiv and its region, Russian troops have been concentrating their efforts in the east of the country since March, where fighting is intense.

Russia pressed its offensive in Ukraine's eastern Donbas region on Sunday as Ukrainian President Volodymyr Zelenskyy said the outcome of the gruelling conflict would determine whether his country's fate lies with the West or under Moscow's domination.

Meanwhile, as the West rallied behind Ukraine, Polish President Andrzej Duda made an unannounced visit to Kyiv and on Sunday became the first foreign leader to address the Ukrainian parliament, the Rada, since the start of the war. 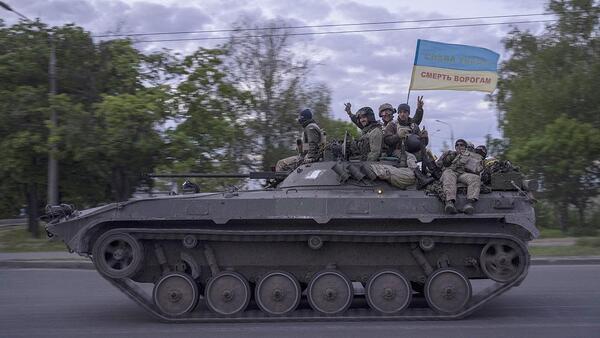 The 194 member countries of the World Health Organisation (WHO) are meeting in Geneva against the backdrop of the war in Ukraine and its attendant global threats, and a never-ending COVID-19 pandemic, to build a more effective and fair global health system.

A resolution initiated by Kyiv aims to specifically denounce Moscow's attacks on the health system but also condemn the grave consequences of the invasion and blockade of Ukrainian ports on global supplies and the explosion in grain prices.

"The war in Ukraine has a systemic impact on international organisations, as it means that a considerable amount of time must be spent on managing the Russian issue in organisations and on the consequences for health in Ukraine, Europe and the world," a European diplomat told AFP.

Turkish President Tayyip Erdogan, who has objected to Sweden and Finland joining NATO, held phone calls with the leaders of the two countries on Saturday and discussed his concerns about terrorist organisations.

He also said an arms exports embargo imposed on Turkey after its Syria incursion in 2019 should be lifted, it added.

In another call, Erdogan told Finnish President Sauli Niinisto that failing to deal with terrorist organisations that posed a threat to a NATO ally would not suit the spirit of the alliance, Ankara said.

The Russian army is focusing its efforts on taking Sievierodonetsk, according to Luhansk Governor Serhiy Haidai.

"The Russians tried to enter Sievierodonetsk from 4 directions at once, but they were repelled and retreated to their earlier positions," Haidai said on Telegram.

The Russian troops have continued to bombard civilian targets with artillery, Haidai said.

It is widely believed that taking control the city of about 100,000 on the Siverskyi Donets river is one of Moscow's main tactical priorities in the east of Ukraine.

The list also features the late US senator and Republican presidential candidate John McCain, while Donald Trump is not under any Russian sanctions.

The "counter-sanctions" aim to "force the current American powers, which are trying to impose a neo-colonial "world order" on the rest of the planet (...) to change their position and recognise new geopolitical realities", according to the Russian Foreign Ministry.