Exiled Afghan President Ashraf Ghani on Wednesday defended his decision to leave Kabul as the Taliban advanced and eventually toppled his government.

He claimed that he was "forced to leave Afghanistan with one set of traditional clothes, a vest and the sandals I was wearing." Ghani left Afghanistan on Sunday just as the Taliban approached Kabul.

In a video posted on his Facebok page, Ghani also confirmed that he was in the United Arab Emirates, which said it had accepted him on "humanitarian grounds".

He said he was "in discussions" over a return to the country and supported the new dialogue between the Taliban and officials from the last government.

Meanwhile the European Commission has said EU member states must accept people from Afghanistan who are "in immediate danger"..

"Journalists, NGO staff and human rights advocates in Afghanistan are amongst those who are most at risk, women in particular," Home Affairs Commissioner Ylva Johansson said in a statement.

"We need to offer legal, safe and organised pathways towards the EU... I have called on Member States to step up their engagement on resettlement, to increase resettlement quotas to help those in need of international protection."

A summary of other key developments (see our blog below for the latest updates):

22:57
That wraps up our live Afghan coverage for today, thanks for following Euronews. Follow us on social media and catch our TV coverage here:

The United Nations says it's sending about a third of its 300 international staff in Afghanistan to Kazakhstan to work remotely on a temporary basis in light of “the volatile situation in the country.”

U.N. spokesman Stephane Dujarric announced on Wednesday that about 100 U.N. personnel were traveling from Kabul to Almaty, Kazakhstan’s largest city, to work in a temporary satellite office.

He said the majority of the U.N.’s humanitarian staff “remain in Afghanistan, providing vital assistance to millions most in need.”

Secretary-General Antonio Guterres told the U.N. Security Council on Monday following the Taliban takeover of the country that the U.N. is committed to staying in Afghanistan and helping millions of people, but he also said the 193-member world organization will adapt to the security situation.

“This is a temporary measure intended to enable the U.N. to keep delivering assistance to the people of Afghanistan with the minimum of disruption while at the same time reducing risk to U.N. personnel,” Dujarric said. “Personnel will return to Afghanistan as conditions permit.”

In addition to the international staff, the U.N. and its agencies have about 3,000 Afghan employees.

Dujarric said “a significant amount of work is being undertaken, as we speak, specifically to safeguard national staff.”

The International Monetary Fund announced on Wednesday that it was suspending aid to Afghanistan due to the uncertainty surrounding the status of the rulers in Kabul after the takeover of the country by the Taliban.
"As always, the IMF is guided by the views of the international community," a spokesperson told AFP. "There is currently a lack of clarity within the international community regarding the recognition of a government in Afghanistan, as a result of which the country cannot access SDRs (special drawing rights) or other IMF resources ".
22:06

EU states should 'take in people in immediate danger' in Afghanistan, says Brussels 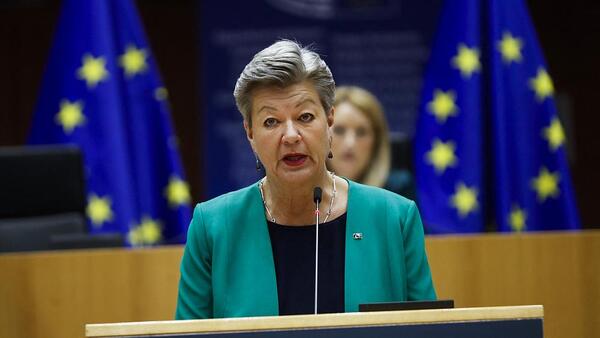 EU states should 'take in people in immediate danger' in Afghanistan

The White House said on Tuesday that the Taliban have agreed to allow safe passage for civilians trying to leave Afghanistan, but the flow of evacuees has been constrained by Taliban obstacles.
Taliban curfews and checkpoints have limited the number of people who are able to reach U.S.-run evacuation processing points inside the airport.
Deputy Secretary of State Wendy Sherman says the U.S is working tirelessly to help get safe passage for those who want to get to Kabul airport so they can leave Afghanistan.
20:57

Ousted president says he was 'forced' to flee country

Afghan President Ashraf Ghani on Wednesday defended his decision to leave Kabul as the Taliban advanced and eventually toppled his government.

In a video posted on his Facebook page, Ghani also confirmed that he was in the United Arab Emirates.

He thanked Afghan security forces in his message, but also said that the "failure of the peace process" led to the Taliban snatching power.

Ghani also indirectly tried to quash an accusation by Afghanistan's ambassador to Tajikistan that he had stolen $169 million from state funds.

He claimed that he was "forced to leave Afghanistan with one set of traditional clothes, a vest and the sandals I was wearing."

On Wednesday, the United Arab Emirates said it had accepted him and his family on account of "humanitarian considerations."

More on the anti-Taliban protests in Jalalabad in eastern Afghanistan. At least one person was killed after Taliban militants attacked protesters who had taken down the group's banner and replaced it with the country's flag.
The drama has sparked fears about whether the insurgents -- who completed a rapid takeover of the country at the weekend -- will govern the nation in the manner they claim.
"The onus is on the Taliban to prove to the people that they can stick by their word and they can stand by their word," Ali M Latif, a Kabul-based journalist told Euronews.
READ MORE: 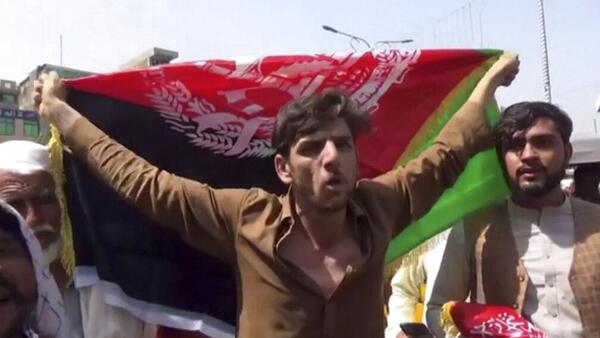 One dead after Taliban militants attack protesters in Afghanistan

Ghani 'in discussions' over return to country

In his video address from the UAE which has given sanctuary to the ousted president and his family, Ashraf Ghani said he was "in discussion" over a return to Afghanistan.
He said he supported the dialogue that has begun between the Taliban and his predecessor as president, Hamid Karzai.
19:55

Exiled Afghan President Ashraf Ghani on Wednesday evening sent a video message to his compatriots from the United Arab Emirates, which confirmed earlier it had accepted him into the Gulf state "for humanitarian reasons".
As a preamble to his message, posted on his Facebook account, Ghani explained that he would deal with "recent developments" in Afghanistan, which he fled last weekend as the Taliban regained power.
19:51

Members of Parliament were recalled from their summer break to attend the emergency session in London. Many, including a large number from Boris Johnson's Conservative Party, voiced strong regrets and fears at the chaotic turn of events.
The Prime Minister said he had little choice but to follow the decision of U.S. President Joe Biden to take American troops out of Afghanistan by the end of August.
But Labour opposition leader Sir Keir Starmer said there had been "a major miscalculation of the resilience of the Afghan forces and a staggering complacency from our government about the Taliban threat".
One of the strongest criticisms came from former PM Theresa May, who asked whether Johnson had hoped “on a wing and a prayer it’d be all right on the night."
“We boast about global Britain, but where is global Britain on the streets of Kabul?” she asked. "A successful foreign policy strategy will be judged by our deeds, not by our words.”

Before returning to Afghanistan, Baradar and a Taliban delegation met with the Qatari Foreign Minister Mohammed bin Abdulrahman Al-Thani.

On Twitter, Al-Thani said they "discussed the necessity of reaching a comprehensive political settlement that achieves a peaceful transfer of power, preserves the gains made by the Afghan people, and heightens the desired stability in Afghanistan."

One of the major difficulties for any new government will be boosting the economy — one of the poorest in the world — as Western countries ponder cutting crucial development assistance to the country.

The Taliban's revenue over the past two decades has derived from the opium trade, other criminal activities including extortion and taxes it imposed over territories under their control.

One of the group's spokesperson said on Tuesday however that "Afghanistan will no longer be an opium-growing country" with production to return "to zero again", as it was when they last ruled the country.

He added that they would welcome foreign aid: "We have had exchanges with many countries. We want them to help us."

Josep Borrell, the European Union's top diplomat, told reporters on Tuesday evening that the bloc is suspending the €1.2 billion development assistance planned for Afghanistan over the 2021-2024 period. This followed a similar decision from Germany.

Borrell said the EU "will engage in a dialogue (with the Taliban) as soon as necessary to prevent a humanitarian and a potential migratory disaster." The EU said its humanitarian assistance will continue and may be increased.

The UK has also suggested it could reduce its development assistance to Afghanistan. Britain has allocated £93.8 million (€110 million) in aid to Afghanistan for the 2021/2022 period.

Humanitarian assistance is to be increased, Prime Minister Boris Johnson confirmed during a phone call with US President Joe Biden on Tuesday. The country also plans to take in 20,000 Afghan refugees over the coming years.

The White House said in its own readout of the call that the two leaders "agreed on the need for close coordination with allies about the future of aid and support to Afghanistan now that the Taliban is in charge" and that they "agreed to hold a virtual G7 leaders' meeting next week to discuss a common strategy and approach."

Merkel and Macron have already been in contact over the developments in Afghanistan, notably to coordinate efforts to push for a common EU migration policy. The German leader also discussed the issue with her Italian counterpart, Matteo Draghi.

Italy, alongside Greece, Spain and the Western Balkans, is one of the major routes into the EU for migrants.

Draghi said the G20, of which Italy currently holds the presidency, is "the natural" forum to launch a process of collaboration among countries including China, Russia, Saudi Arabia and Turkey, in addition to Europe.

"The future for Italy is made up by the defense of fundamental rights, the defense of the rights of women and the protection of all those who exposed themselves in these years to defend these rights in Afghanistan. This must be undertaken in all possible contexts," he said.

A G20 ministerial meeting is planned later this month dedicated to women.