A collection of stories of Ukrainians who have started inspiring social and business projects in the eastern Donbas region, in the hope that development will help bring peace to a land now in its third year of conflict.

From miner to farmer

“People just had nowhere to live, we gave them clothes and paid them salaries. That’s basically the story,” says Ivan Poliushko, formerly a miner from Makiivka and now a farmer. He is speaking about workers at his farm. It has been operating a little more than a year and arose partly from a long-held dream and partly because of the war. Poliushko had to flee with his family from a combat zone; Makiivka is occupied by pro-Russian separatist rebels. A desperate situation pushed him to start a new life and do something he had wished to do for a long time. “In my very young years girls laughed at my dream about agriculture, there, in the middle of a mining region,” says Ivan, smiling. 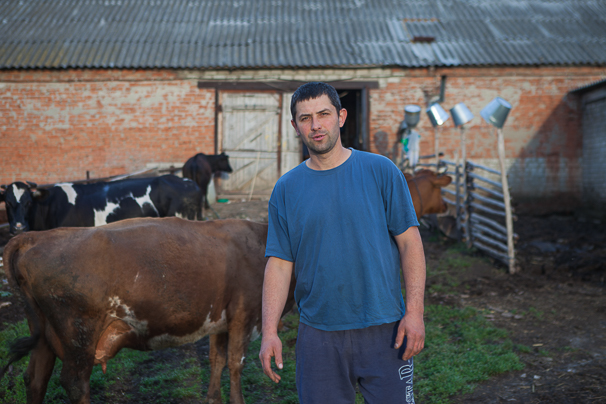 Last spring, in a new location, Ivan found an old farm and bought his first cow. The following month he planted a field with sunflowers. Proceeds from selling them made it possible to further develop the farm. Significant financial support was provided by local volunteers. They had been taking care of Ivan since he and his family found refuge in the local centre for internally-displaced persons.

Ivan also invested his own funds; he says that sometimes he even pawned old, gold jewellery belonging to his family in order to raise enough money to buy cattle. One day he transported a bull-calf weighing around 200 kilos in an old car. It was a bargain buy. Yes, that’s right, in the back seat of his car! 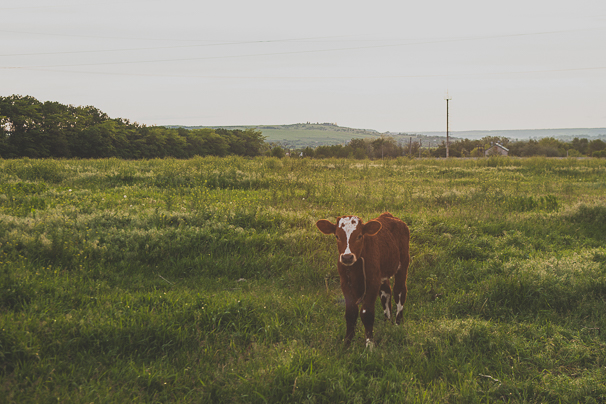 Today his farm consists of cows and bull-calves, goats and sheep. Ivan also cultivates seedlings and dreams about opening an eco-store selling farm products. Together with his wife and three children, this lover-of-the-land continues to live in the centre for internally-displaced persons near Sloviansk, in a tiny room with double bunk-beds. A home of their own is, of course, a basic necessity for this family. However, all of their time and funds are so far invested into their cherished farm. 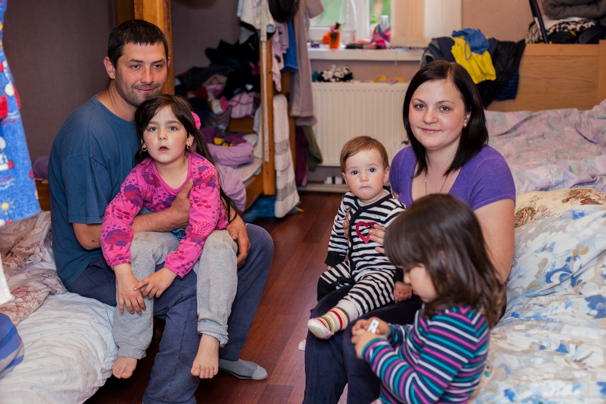 In the city of Maryinka, people line up near a bread kiosk. The bread is sold at a so-called “social price” which covers solely the cost of its production. It is baked nearby at a Christian Aid Community Centre operating in the city. On a quiet day, it bakes 3,000 bread and bakery products. However, because of regular shelling Maryinka suffers frequent power cuts and bakery workers try to give away as much dough as possible to people who live in the town. 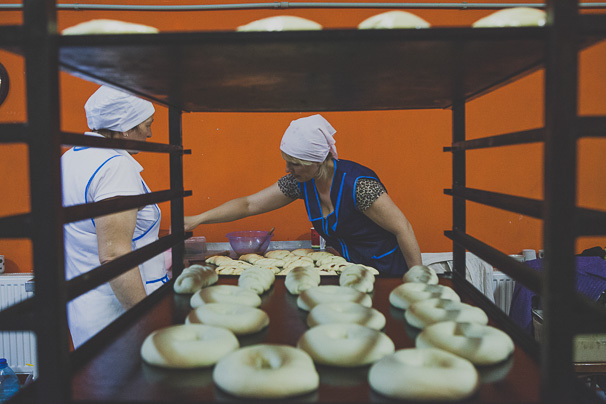 Volunteers at the Christian Aid centre also take care of the most vulnerable social groups in a number of frontline cities. Among their tasks they rebuild houses damaged by the shelling, offer basic humanitarian aid and organise camps for children.

“The funding needed to help local inhabitants comes from ordinary people who want to contribute on an individual basis or collect financial support in their region. Sometimes international organisations and churches from the USA and Great Britain provide assistance,” says Serhiy Kosiak, a pastor who had to flee Donetsk. He is now an internally displaced person, who coordinates this volunteer movement. 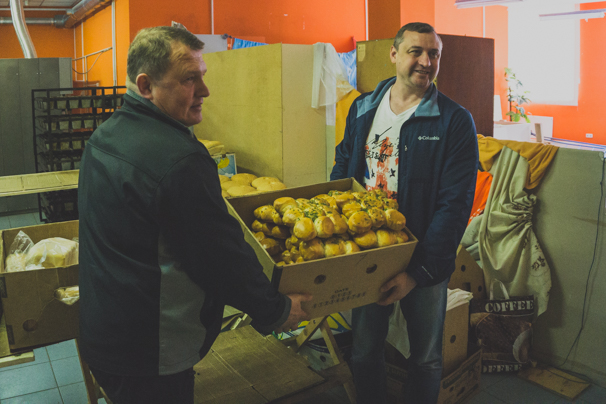 “Good attracts good,” thinks another local volunteer, Oleh Tkachenko, who believes that a good deed can bring peace to the region.

Krasnohorivka is one of the cities where volunteers bring free bread. The city suffers from regular shelling attacks. Oleh, dressed in a bright, Ukrainian, embroidered shirt, shows me scars on the walls of the city, exhausted by war. Plenty of people live in the bullet-riddled, high-rise buildings with broken windows. Inhabited apartments border empty ones. Most of Krasnohorivka’s residents lost their source of income a long time ago, meaning help from volunteers is not just important but crucial for them. 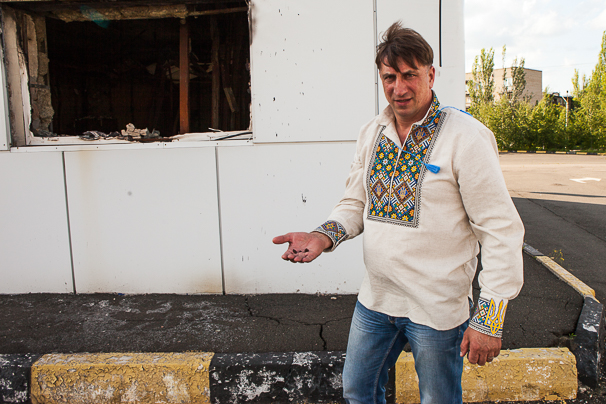 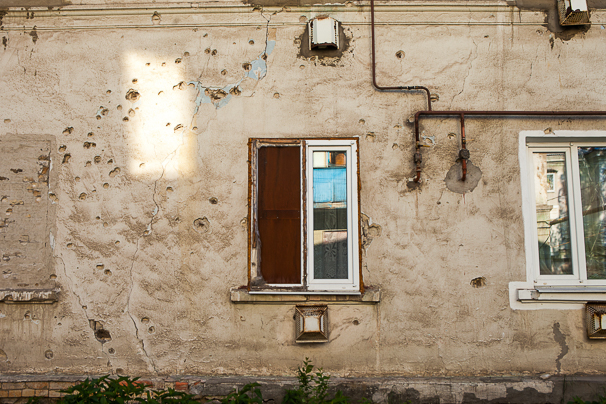 This is a landscape of Melova Flora nature reserve, close to the village of Kryva Luka, in the Donetsk region. I knew nothing about this place when I first came here to see how an eco-tourism centre in the war-hit region is being organised. 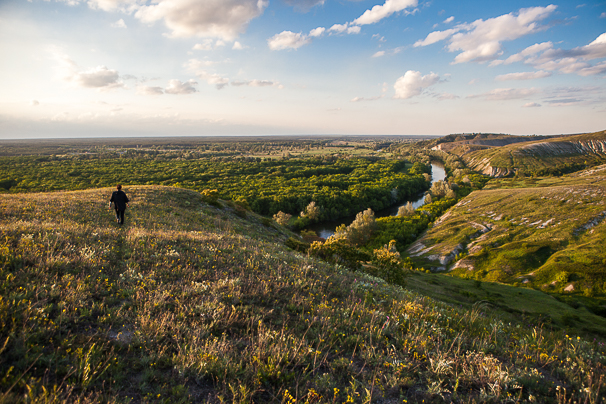 On-site everything became clear and soon it began to make sense: you can’t help but feel a lighter mind when you see such beautiful scenery. To make this place better-known would be a valuable gift to visitors seeking unusual and picturesque routes.

It’s Yana Synytsya’s initiative to promote the place to tourists. She used to have a travel agency in Donetsk, which stopped operating after the city was occupied by the self-proclaimed Donetsk People’s Republic. The Donetsk resident moved to Kryva Luka with her family. It was not easy at first. She had to think over her life circumstances: it seemed that all her previous professional experience had been in vain. However, having got over the shock, the tour organiser returned to her favourite work.

Yana has more ambitious plans for the region than a regular tourist service could offer and her ideas are already taking shape. 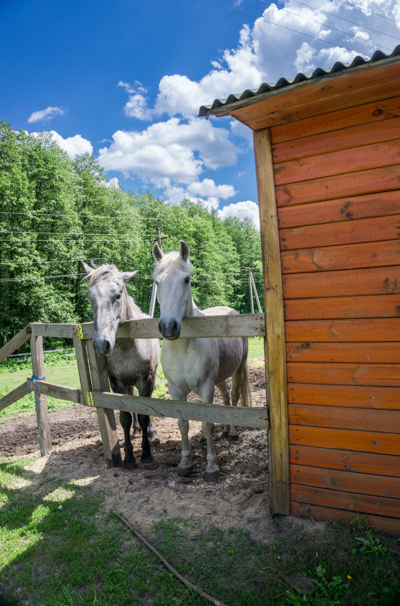 “For the last few weeks, I have been really happy with a photography exhibition that we managed to hold,” says Leonid Dovhy, a well-known photographer in the region, who had to leave his native Makiivka and now also lives in Kryva Luka, supporting Yana’s initiatives. This event was meaningful for the whole community; villagers – often elderly people – travelled here to see photos of their old stomping ground. Some of the beautiful scenery they had known in their youth was almost forgotten: old age and poor health making it impossible to climb the high slopes of Siversky Donets river. As a memento, the visitors received cards with photos, which they particularly liked.

“I want to create a tourism hub, an information centre, which would offer maps and routes to the guests. I hope it would help to develop an active social life in the region, motivate people to come here for lessons, training courses and seminars and give everybody plenty of new impressions, acquaintances and ideas when they return home,” says Yana.

The initiative has already breathed new life into the village, and everybody I met there considered that it was largely thanks to Yana. With admiration, she, herself, talks about people she has met while putting her idea into practice: an enthusiastic local official, a group of active residents of this and neighbouring villages, local ethnographers and geologists and so on.

The existing tourism infrastructure in the region consists of several recreation centres. There are paid beach areas with white sand and newly-installed harbours, a sauna area and other modern facilities. There are more basic options too. 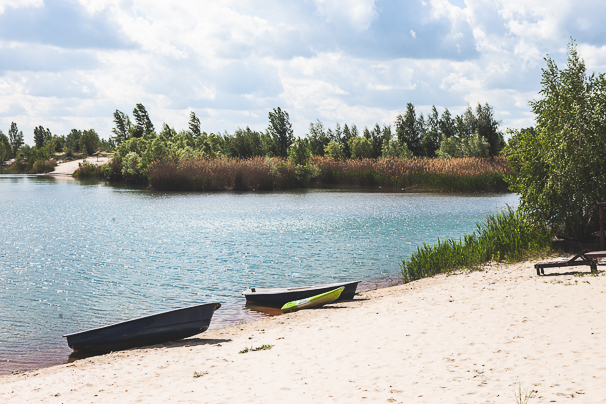 After the hostilities, they have been restoring a local ostrich farm, which lost almost its entire population of non-flying birds during the war, yet this spring the first offspring since then has appeared on the farm. 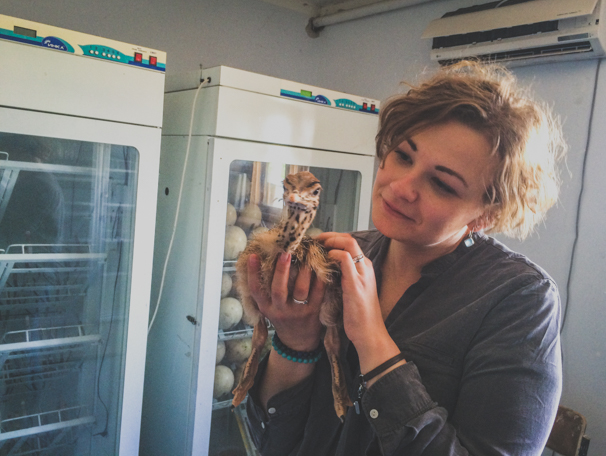 “And where are you from? Do you know the story of our land?” local historian Hennadiy Kirkach asks me bluntly.

This man spends every spare hryvnia (local currency) he has on purchasing historical items. He is taking me in his old Lada car to show me the village on the outskirts of Sloviansk, where his dream is slowly coming true. 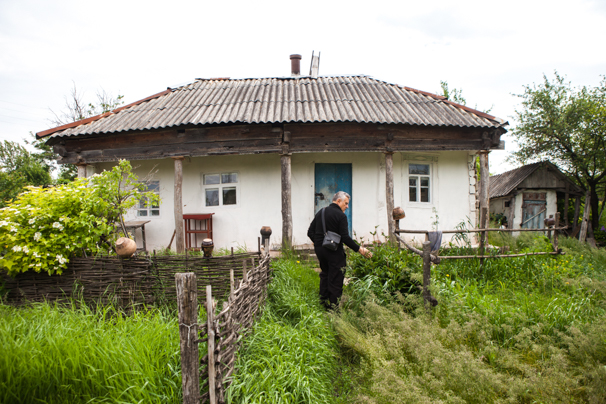 Searching for historical and vintage treasures for years, Hennadiy Kirkach has worked single-handedly to establish museums. And while they are not fully operational, the project is well underway.

Not far from Sloviansk he has bought, raised from the ground and repaired three old houses. It is here that, one day, interactive museum centres will open to everyone interested in the history, culture and everyday life of the land.

Looking at this collection of old utensils, pictures and books collected over his lifetime, I want the local historian to succeed in his work as quickly as possible. Above all, it would be good for the people – people who have been through so much. 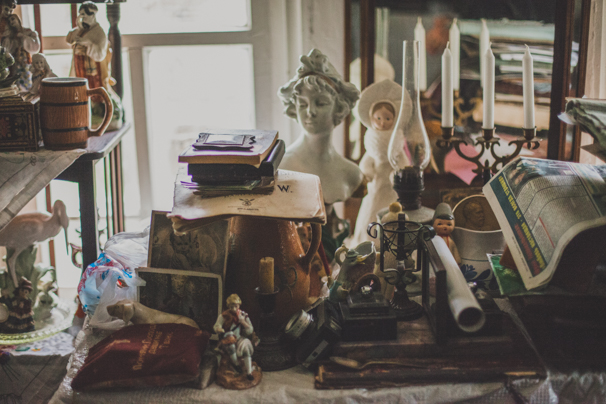