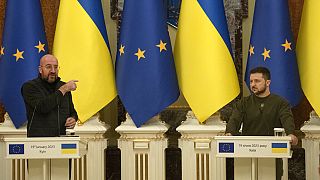 The European Council's president, Charles Michel on Thursday said that tanks "must be delivered" to Ukraine as he visited the war-torn country.

The European Council's president, Charles Michel on Thursday said that tanks "must be delivered" to Ukraine as he visited the war-torn country.

Michel travelled to Kyiv on the eve of a major meeting at the US military base of Ramstein in Germany to discuss military aid to Ukraine on Friday.

"I firmly believe that tanks must be delivered," Michel tweeted after talks with Ukrainian President Volodymyr Zelenskyy.

"We want to support you because we are aware that the next few weeks may be decisive for what comes next," he wrote.

Zelenskyy for his part called his talks with Michel "meaningful".

"Ukraine and the European Union have already achieved significant results in our historic rapprochement," he tweeted.

"We are working to achieve even more."

Zelenskyy has called for modern, Western-designed heavy tanks while many of Ukraine's allies have announced plans to step up their military support to Kyiv this month.