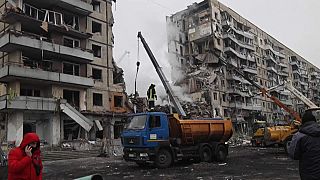 Search and rescue operations are still going on, two days after a deadly Russian missile struck an apartment building in Dnipro.

Search and rescue operations are still going on, two days after a deadly Russian missile struck an apartment building in Dnipro.

At least 40 people were killed and 75 injured, with 35 people still reported missing, according to Ukrainian authorities.

The last person to be rescued was heard calling out soon after midnight on Saturday. It took nine hours to reach her, by which time she had severe hypothermia.

Canine units are on the ground searching for more survivors, but hope is fading as so far six bodies were found.

Russia has confirmed the missile strike was theirs but did not mention the apartment block. The country has repeatedly denied targeting civilians.

Meanwhile in Kherson, a Red Cross building and a children's rehabilitation centre were damaged, with 7 people injured and one killed following Russian shelling.

The head of the military administration in the southern Kherson region, Yaroslav Yanushevych, said Kherson was again under "massive attack".