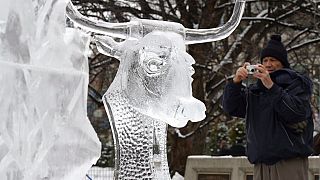 Madrid has launched the 2022 Ice Festival - an international competition featuring some of the world’s best ice sculptures.

Madrid has launched the 2022 Ice Festival - an international competition featuring some of the world’s best ice sculptures.

This is the first time the Spanish capital has put on an ice exhibition and it has become an instant hit, with visitors praising the displays on Monday.

"The truth is that I loved it. It is very, very nice and I highly recommend coming to see it," Teresa Diaz said.

A total of 12 teams competed in the competition, with sculptors taking part from 10 different countries, including Canada, US, Japan, Italy and France.

More than 100 tons of ice was used to make the sculptures, which are kept frozen in a specially-designed room.

The winning exhibition was the Canadian entry by Julian Doré and Jean Francois Gauthier called “Invasion of Dimensions’.

With the melting of the sculpture inevitable, the exhibition's commissioner and winner of the 2014 tournament, Juan Carlo Arellano, described it as a reflection of reality.

"The most general comment is 'what a pity, isn't it?' And I always tell them that it is like life itself, it is very beautiful while you live it, but it is ephemeral," he said.