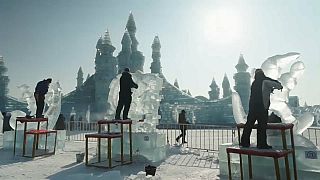 Thirty-four teams of artists from around the world continued work on their grand ice sculptures on Monday (January 7) as the three-day competition in China's north-eastern Harbin, the host of an annual international ice and snow festival, heated up.

Each piece of art, being sculpted by people from 16 countries, including Russia, Canada, Spain, the UK, and China, was originally a solid block of ice pulled from the nearby Songhua river.

It's Catalonian artist Lluís Ribalta Coma-Cros' seventh year participating in the competition. He and his wife, Fàtima Naranjo Almenara, were in the midst of creating an abstract shape of the sun. Local Harbin artist Hu Song was meanwhile busy carving the headdress for a female warrior in traditional Beijing opera.

The ice sculpture contest began on Sunday (January 6) and is scheduled to end on Tuesday (January 8), when the final results will be announced.