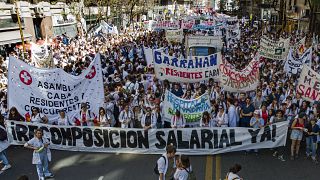 Thousands of hospital staff take to the streets of Buenos Aires

Thousands of hospital staff take to the streets of Buenos Aires

Protests and demonstrations were seen across South America on Tuesday.

Protests and demonstrations were seen across South America on Tuesday.

In Argentina, doctors, residents, nurses and health workers protested in the capital Buenos Aires to demand salary increases and better working conditions. The inflation rate continues to rise and is projected to reach 100% this year.

Meanwhile in Peru, dozens of fishers show and lay down contaminated raw fish in front of the Spanish oil company Repsol's HQ in Lima to protest against the pollution caused by an oil spill off the Peruvian coast in January. Around 15,000 people were affected, according to preliminary estimates by the Ombudsman's Office in March

Watch both protests in our video player above