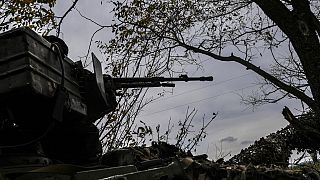 Ukrainian officials said on Wednesday that "Russian" shelling has targeted Ukraine's energy facilities and killed at least six civilians over the last 24 hours.

Ukrainian officials said on Wednesday that "Russian" shelling has targeted Ukraine's energy facilities and killed at least six civilians over the last 24 hours.

Four cities were attacked around the Zaporizhzhia Nuclear Power Plant in eastern Ukraine.

16 more people are reported injured in the strikes.

Residential buildings in Nikopol, Marhanets, Chervonohryhorivka, located on the opposite bank of the Dnieper, were damaged. Meanwhile, fighting in Bakhmut, a city in the eastern Donestk region, also continued.

It said the attacks were intended to destroy energy facilities.

In Kryvyi Rih, the largest city in central Ukraine, there is no electricity in several districts of the city and several pumping stations of local water utilities have been cut off, resulting in water shortages, according to the president’s office.

The mayor of Enerhodar, Dmytro Orlov, said that as a result of the shelling in the city, where employees at the Zaporizhzhia nuclear power plant live, electricity and water were partially lost.

The Mykolaiv region was allegedly attacked by Iranian-made kamikaze drones. The Ukrainian army claims it shot down more than a dozen, preventing any damage.