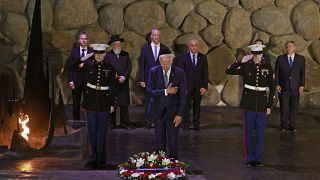 Palestinians hang banners reading: "Mr. President, this is apartheid", in the West Bank biblical city of Bethlehem, ahead of US President's arrival for an official visit. "From the Jordan River to the Mediterranean Sea, the apartheid system is one," says B'Tselem Field Research Director Kareem Jubran, adding that the "international community must put pressure on this system, to abolish it."