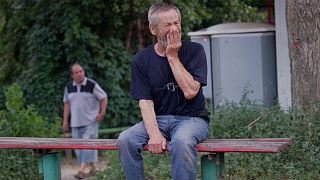 Widower among mourners as three killed in Kharkiv

At least three people died and five more were injured on Thursday by Russian shelling in Ukraine's second-largest city of Kharkiv, according to a regional emergency service.

Natalia Kolesnik was among the victims.

Her family cried near her body before emergency workers took it away and started conducting an investigation into the attack.

The crater left by the shell was near a residential building.

Many residential apartments were damaged in the attack.

Ukrainian forces have been putting pressure on Russia in the northern Kharkiv region, but have so far not achieved a breakthrough, the Ukrainian military said on Thursday in its regular social media update.