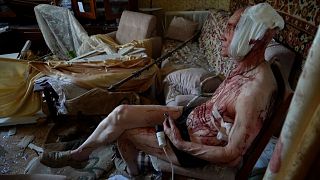 Burning cars and broken trees smoldered at the scene of the strike, which left a crater in the center of a courtyard

Meanwhile, as fighting intensified in the region, with Russian and Ukrainian forces battling for the control of several key cities, hundreds of people continued to flee eastern Ukraine.

On Wednesday, dozens of Ukrainians left on a special evacuation train, departing from the city of Pokrovsk heading to Dnipro and other cities further west.

Most of the evacuees boarding the train in Prokrovsk were from areas where Russian forces are concentrating their offensive to capture the Donbas region, including the cities of Sloviansk and Bakhmut.

Mostly women, children and the elderly were on board the train.