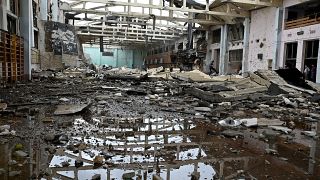 Recent shellings have left an apartment building in Seversk village near Lysychansk severely damaged. The current main road to Lysychansk has been heavily shelled as Russian forces battle for the devastated city.

Ukrainian rescuers removed a 500-kilogram air-dropped bomb from the roof of a residential building in Kharkiv on Thursday.

The bomb was dropped on the building in the neighbourhood of Saltiv three months ago.