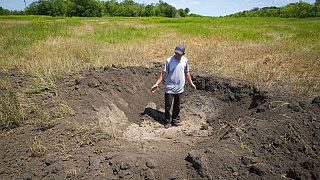 Shelling in Ukraine on Thursday damaged several buildings and civilian infrastructure at a town on the outskirts of Kharkiv, local residents said.

Oleh Chernobai, the head of local administration in Pesochin, detailed the damage to the town and footage showed debris, mangled structures and destroyed cars covered in rubble.

A five-meter-deep shell crater was left at the site.

Mine and unexploded rocket clearance is being carried out meticulously in Kharkiv.

Ukrainian security forces are working on the destruction and detection of mines left behind by Russian soldiers and rocket / artillery shells that were fired during the attacks but did not explode.

According to the regional prosecutor's office, Kharkiv and its suburbs have been shelled with ballistic missiles every night for more than two weeks.

The prosecutor's office says strikes are carried out from Russia's Belgorod region.