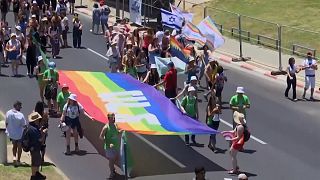 Tens of thousands of people attended the Pride parade in Tel Aviv on Friday, celebrating the LGBTQ community and calling for equality in the largest annual gathering of its kind in the Middle East.

Israel is a rare bastion of tolerance for the LGBTQ community in the conservative Middle East, where homosexuality is widely considered a taboo and is banned in some places.

Homosexuals serve openly in the Israeli army and parliament, and the current health minister is openly gay.

Yet they have not achieved full equality.

The ultra-Orthodox Jewish parties, which have considerable influence on matters of religion and state, oppose homosexuality as a violation of religious law, as do other religious groups in Israel.