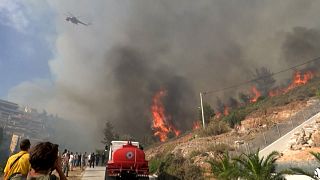 A wildfire in southern Athens' coastal suburbs was under control on Sunday, but it still damaged some homes in the area, Greek authorities said.

The Greek Fire Service was it was still fighting the blaze that broke out near two Athens suburbs on Saturday.

Local media reported some damage to houses as well as vehicles.

Greek authorities on Saturday ordered the evacuation of parts of the southern Athens suburbs of Voula and Glyfada as a precaution when strong winds fanned the blaze and threatened residential areas.

Thick black smoke from the fire could be seen as far as Piraeus, about 20 kilometers away.

On Sunday morning, 65 fire engines with 283 firefighters were still operating on the spot, according to the fire service.

Officials, including the Minister for Climate Crisis and Civil Protection, his deputy and the head of the Fire Service, defended the state's response to the fire, saying it was prompt but was hampered by the mountainous terrain, high winds which occasionally reached gale force and the fact that there were three separate fires breaking out almost simultaneously.

The fire started in the early afternoon Saturday. According to Deputy Climate Crisis and Civil Protection Minister Evangelos Tournas, the first fire engines were on the spot 12 minutes after the alarm was given and, eight minutes later, firefighting planes and helicopters, 17 in total, lifted off to join the efforts.

Last August, wildfires devastated the northern half of the island of Evia, Greece's second largest. These and other major fires stretched the country's firefighting capability to the limit and required aid from 24 European and Middle Eastern countries, which sent planes, helicopters, vehicles and hundreds of firefighters.

On Thursday, the European Commission said that more than 200 firefighters and technical equipment provided by EU countries will be soon deployed to Greece to allow for a swift response to large wildfires.