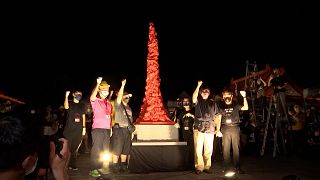 Over 500 people gathered in Taipei City to commemorate the 33rd anniversary of the deadly Tiananmen Square crackdown.

For decades, Hong Kong and nearby Macao were the only places in China allowed to commemorate the violent suppression by army troops of student protesters demanding greater democracy in Beijing’s Tiananmen Square on June 4, 1989.

Hundreds, if not thousands, were killed.

The commemorative event this year in Taiwan featured some Hong Kong characteristics, activists said, as June 4 anniversary events are currently banned in the former British colony.

The ban is seen as part of a move to snuff out political dissent and a sign that Hong Kong is losing its freedoms as Beijing tightens its grip over the semi-autonomous Chinese city.

The event in Taiwan this year also unveiled a reproduction of the "Pillar of Shame", a sculpture designed by Danish artist Jens Galschioet which depicts torn and twisted bodies symbolizing the lives lost during the massacre.

The original 3-meter sculpture, initially installed in Hong Kong, was removed by local authorities in October 2021.