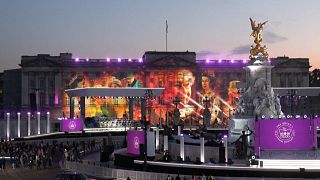 Britain's Queen Elizabeth II triggered the lighting of a chain of ceremonial beacons on Thursday as part of festivities bringing an end to an eventful first day of celebrations for the monarch's Platinum Jubilee.

The queen was presented with a "Commonwealth of Nations Globe" at a ceremony in the grounds of her Windsor Castle residence which she pressed to trigger the start of beacon lighting across the UK.

In London, Prince William attended a ceremony at Buckingham Palace, watching on as the Tree of Trees sculpture lit up after the queen pushed the button at Windsor.

Thousands of beacons were expected to be lit across Britain on Thursday evening as people marked Queen Elizabeth's 70 years on the throne.

Beacon lighting is a traditional element of British royal celebrations that began as a way for people far from London to take part in festivities.