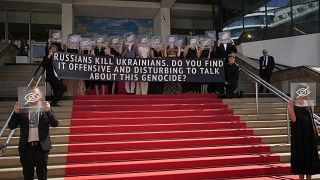 Ukrainian director Maksym Nakonechnyi protested the censorship of images of the war in his home country at the Cannes premiere of his film "Butterfly Vision" on Wednesday, May 25.

He was joined on the red carpet by producers Darya Bassel and Yelizaveta Smit, and lead actress Rita Burkovska.

They unrolled a banner saying: "Russians kill Ukrainians. Do you find it offensive or disturbing to talk about this genocide?" and held up screens reading "Sensitive Content" in front of their faces while air raid sirens were played over the speaker system.

"Butterfly Vision," shown in the Un Certain Regard section of the festival, tells the story of Lilia, a Ukrainian recon specialist in the army who returns home after being captured in the Donbas conflict.

The 75th Cannes Film Festival runs until 28 May.