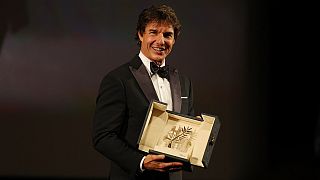 A surprise as the Cannes Festival likes to do. On Wednesday 18 May, before the screening of the highly anticipated Top Gun: Maverick, Tom Cruise was presented with an honorary Palme d'Or by the festival president, Pierre Lescure.

Earlier in the day, he participated in a masterclass and answered many questions from the audience.

The Patrouille de France flew over the red carpet of the Palais des Festivals to pay a tribute to the character played by the actor in the second part of Top Gun.