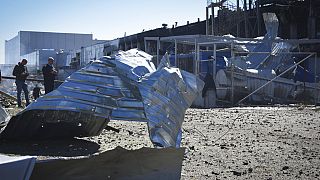 Russia pounded away at Ukraine’s vital southern port of Odesa, Ukrainian officials said on Tuesday, as they announced they found the bodies of 44 civilians in the rubble of a building in the northeast that was destroyed weeks ago.

The port came under repeated missile attack, including from some hypersonic missiles, after Russia marked its biggest patriotic holiday without giving new information about the war.

Earlier, the Ukrainian military said Russian forces fired seven missiles from the air at Odesa, hitting a shopping centre and a warehouse.