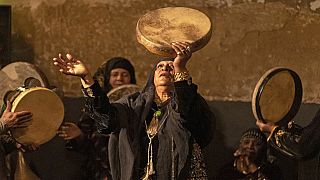 A stage, a spotlight, a mesmerised audience: it looks like a normal concert but Um Sameh is singing to heal the sick by driving out the demons that possess them.

At Cairo's Makan Cultural Centre, the Mazaher ensemble performs a lighter version of "zar", an music and dance ritual with centuries-old roots, that aims to ward off or exorcise jinn, or evil spirits.

The music and dance ritual known as "zar", with centuries-old roots in Ethiopia and Sudan, is traditionally performed to ward off or exorcise jinn or evil spirits.

Traditionally, the zar ritual would last several days and include animal sacrifices. But no blood is spilled at Cairo's Makan Cultural Centre, where the group performs to the delight of foreign and local guests.

The audience is bewitched by Umm Sameh's voice and nod their heads to the drumbeat.

In a patriarchal society where women face frequent discrimination, zar ceremonies are among the few cultural practices in which they take centre stage.

Umm Sameh said she learned the ritual from age 11 from her mother and grandmother.

Six decades later, she recites the same lyrics to the same tunes -- all from memory, she adds proudly, because she has "inherited them and grown up with them".

Times are indeed changing. The ensemble, whose musicians and dancers were all over 60, have brought in a new member.

Azza Mazaher, who grew up watching her mother Umm Hassan do percussion, now also drums and energises the show as she dances across the stage.

Azza said the group now performs in both the old and new ways.

Mazaher has taken part in several European festivals, and more Egyptians are flocking to their Cairo performances, appreciative of the home-grown artform.

Mariam Essawi, an audience member in her 20s, said: "They look like us, they represent us. Zar is part of our history and our cultural heritage. It's very strange that we don't know it."