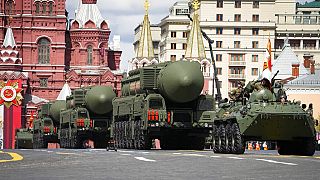 Russia celebrated the 77th anniversary of the Soviet victory over Nazi Germany with a military parade in Moscow on Monday.

According to Russian media 11,000 troops and 131 units of military equipment took part in the procession.

This year's Victory Day not only honors a conflict that ended 77 years ago.

Many Russians will be thinking about the thousands of troops in neighboring Ukraine.