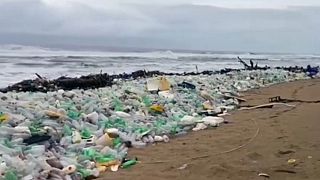 Cleanup operations were underway after deadly floods hit parts of South Africa’s KwaZulu-Natal province at the beginning of last week.

The floods claimed at least 440 lives and made thousands homeless.

The flooding also cut power and water supplies to people across the province.

An NGO called Clean Surf Project has taken it upon themselves to start the lengthy cleanup efforts near Durban.

“This is just 500 metres of a 100km affected,” Clean Surf Project told the Eurovision Social Newswire alongside their video from Umbogintwini Beach.

Last Wednesday, South African President Cyril Ramaphosa surveyed the region by helicopter, describing the flooding as a “catastrophe of enormous proportions” and linking the disaster to climate change.

“It is telling us that climate change is serious, it is here,” Ramaphosa said during a visit to the eThekwini district.