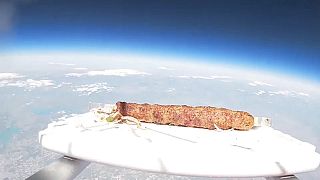 World-famous Turkish dish kebab attempted to be sent into space

A Turkish restaurant owner tried to send a plate of Adana kebab, one of the Turkish dishes listed as one of the best traditional dishes in the world, into space with a helium balloon.

Yasar Aydin, a restaurant owner in Turkiye's southern province of Adana, wanted to send a plate of Adana kebab into space to promote the city's proprietary flavour.

After contacting the necessary institutions and organisations, Aydin placed the Adana Kebab plate, which he prepared in his own restaurant, on a special table with a camera and tracking device on it.

With great enthusiasm, an attempt was made to send the table into space with a special helium balloon.

However, the balloon, which went up to an altitude of about 38 kilometres, exploded after 5 hours of flight.

Because of the balloon that burst before reaching space, the kebab plate landed in the sea with a parachute in the province of Hatay, about 75 kilometres from Adana.

The kebab plate, which was found by Yasar Aydin and his team about 8 kilometres off the coast of Payas district thanks to the tracking device, was brought back to the restaurant in Adana to be exhibited.

During the celebration he gave at his restaurant, Aydin expressed his happiness with these words: “I love firsts. I decided to send a kebab plate to space because I wanted it to be the first. I contacted an aerospace company. And they told me they could do this job. And we did it together. It was very nice.”