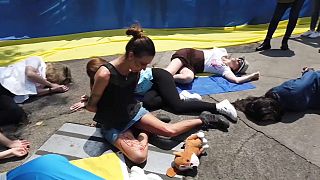 Several dozen people marched Sunday from the iconic Angel of Independence monument in Mexico City to the Russian embassy to protest against the war in Ukraine.

Carrying a Ukrainian flag more than 30 meters (yards) long, they gathered in front of the embassy and lay on the ground in performance to represent the victims of the war.

Protesters sang the Ukrainian anthem and remained outside the embassy for several hours shouting slogans calling for an end to hostilities.