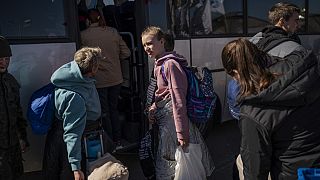 "Maybe people are waiting it out, to see if their city will get attacked or not," said Alina Beskrovna, 31, from Mariupol.

The latest figures from the United Nations High Commissioner for Refugees (UNHCR) show a big drop-off in daily border crossings by refugees.

Over the last week, the top single-day traffic amounted to slightly more than 68,000 – a high number but far below the peak outflows recorded in early March, when more than 200,000 refugees left Ukraine each day on March 6 and March 7.

For three of the last four days, the daily total has not surpassed 50,000 – some of the lowest flows since the Russian invasion on February 24.