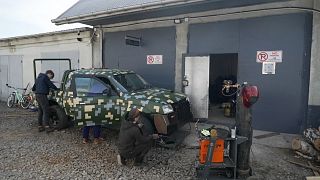 In a welding shop just a few hundred metres (yards) from Russia's latest airstrike in the western city of Lviv, volunteer workers add steel plates to a donated pickup truck so another volunteer can drive it to the frontline.

"We need to keep working because our victory depends on us," said Ostap Datsenko, the welding shop owner.

He had been standing on the truck hurrying to finish his work before sunset Saturday when he heard a noise, looked up and saw an object whizzing through the air.

"It was pretty large, but I've never seen rockets before," he said. "Then I heard a huge explosion."

The blast sent him tumbling inside the back of the vehicle. After picking himself up, he joined the other volunteers in the garage's makeshift bunker in the grease pit.

The following day, he was back at work for the finishing touches on the truck before it's driven on Monday to Donetsk in eastern Ukraine, along with three other vehicles.

The camouflage paint was in place and workers welded bars in the back to help support a machine gun.

Ukraine's military has put up a resistance to Russia's invasion that has surprised some observers. One of its weapons is a parallel army of volunteers who are busy mobilizing funding and supplies ranging from body armor to cigarettes. Others make the military connections.

Artem Pastushyna, a 27-year-old welding engineer with metal nuts in his earlobes, was welding steel plates to the front of the truck "to protect it from bullets and shrapnel."

Only a small number of vehicles have been adapted with steel plates and camouflage like this, he said.

This is the first vehicle the welding shop has adapted, he said, adding that he hopes to do many more.