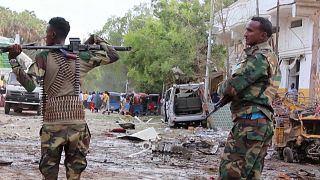 Over 30 dead in twin attacks in Somalia

Over 30 dead in twin attacks in Somalia

The group said it was targeting politicians ahead of elections.

The first attack in Beledweyne district was carried out by a suicide bomber and killed two local lawmakers, including Amina Mohamed Abdi, and several of her guards as she campaigned for re-election.

Minutes later, a car bomb exploded outside the main hospital in Beledweyne, where the wounded were being treated, killing dozens.

Earlier on Wednesday, security forces shot dead two gunmen who tried to storm the airport complex that houses the United Nations, aid agencies, foreign missions and contractors, as well as the headquarters of the African Union military mission, AMISOM.

Three people were killed in the attack: a police officer, an AMISOM soldier and a civilian.