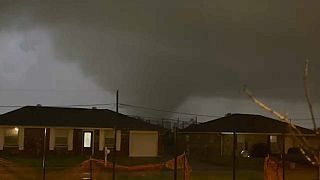 Powerful storms and tornadoes ripped through parts of Texas on Monday and caused widespread damage, the National Weather Service said on Tuesday, March 22.

A tornado touched down in the New Orleans area, Louisiana, USA, on March 22.

Damage was reported on the ground by the National Weather Service as the storm moved west of the Arabi area.

Light blue flashes occurred as the funnel cloud moved across the city.