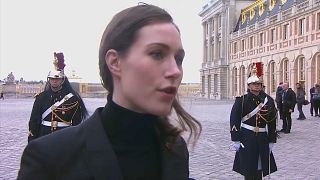 European Union leaders gathered in France on Friday for the second day of talks that come amid Russia's two-week-long war in Ukraine.

European Union leaders gathered in France on Friday for the second day of talks that come amid Russia's two-week-long war in Ukraine.

Lithuanian President Gitanas Nauseda said on Friday that it is important for Ukrainians at the moment to know that they are "fighting for a future in Europe."

On Thursday, European Union leaders ruled out fulfilling Ukraine’s demand for a fast-track integration with the bloc, as they discussed ways to help the country that's been invaded by Russia.

Finnish Prime Minister Sanna Marin said it is important to "get rid of Russian fossil fuels," adding "we are supporting and actually financing Russia's war by purchasing oil, gas and other fossil fuels."

While U.S. and British bans on Russian oil increase the pressure on Europe to follow suit, the continent's dependence on Russia for energy makes an immediate embargo much more difficult.

Europe gets around 40% of its natural gas and 25% of its oil from Russia, whereas the U.S. gets meagre amounts of oil and no natural gas.

An EU boycott would mean higher prices at the pump and on utility bills, and ultimately the threat of an energy crisis and recession while the economy is still recovering from the coronavirus pandemic.